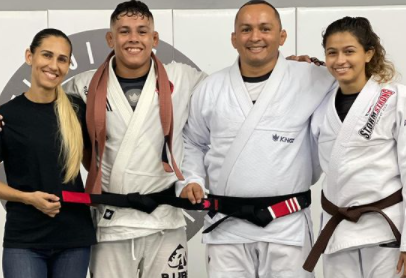 Few grapplers are making a bigger splash on the elite competition scene in 2021 than 17-year old phenom Mica Galvao. In this year alone, he is undefeated in two Who’s Number One matches, had an impressive second-place showing at the EUG tournament, and submitted three opponents in a row at the Third Coast Grappling middleweight grand prix. And he did it all as a brown belt. Now, Galvao finally has a belt to match his skill level, as he was recently awarded his BJJ black belt.

Galvao was promoted by his father, Melqui Galvao. He has spent much of this year training alongside Roberto “Cyborg” Abreu at Fight Sports Miami.

Mica Galvao made a name for himself throughout his teenage years, competing against and defeating legitimate, high-level black belt competitors while still a blue and purple belt. His arrival to the North American competition scene earlier this year marked the arrival of one of the best jiu-jitsu prospects the sport has ever seen.

Galvao promptly announced his presence by winning the 2021 no-gi Pans, and followed up that performance with a dominant decision win over Andrew Tackett at Who’s Number One. Shortly thereafter, the defeated black belts Damien Nitkin and Tainan Dalpra at the EUG 2 grand prix before losing a close but incredibly fun match against Jonatha Alves in the finals. Just a couple weeks after that, Galvao defeated Oliver Taza at Who’s Number One on a Friday night, and returned to action on Saturday night to win the Third Coast Grappling middleweight grand prix on the strength of three submission wins over truly elite black belts.

Congratulations to Mica on this next step in his career; we look forward to watching him compete for years to come.