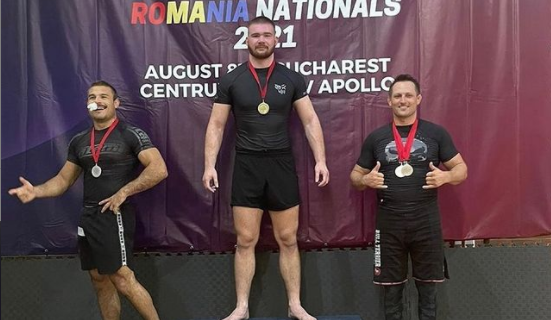 Although the Danaher Death Squad might no longer be a team, grapplers from that squad will continue to make waves. Over the weekend, Daniel Manasoui — a 19-year old grappler that had been training under John Danaher in Puerto Rico — won double gold, submitting all of his opponent at the ADCC Romania Nationals, and he did it all as a blue belt.

“Most of the athletes are very experienced brown and black belts. Big Dan won double gold, both his weight division and absolute with his devastating submissions game – specializing of course in leg locks,” Danaher wrote about his student’s performance.

Daniel Manasoiu, who’s Instagram handle is aptly “jiujitsugiant,” is a heavyweight grappler that regularly trains alongside the likes of Gordon Ryan and Garry Tonon. Although he is currently short on high-level accomplishments, both Ryan and Danaher had previously mentioned Manasoiu as one of the team’s best prospects.

Danaher is no stranger to helping grapplers that are relatively new to jiu-jitsu find success at the highest levels. Danaher’s student Nick Rodriguez earned a silver medal at the 2019 ADCC championships as a blue belt.

Keep an eye on Manasoiu, as he continues to compete and continues to find more high level opportunities open up for him.