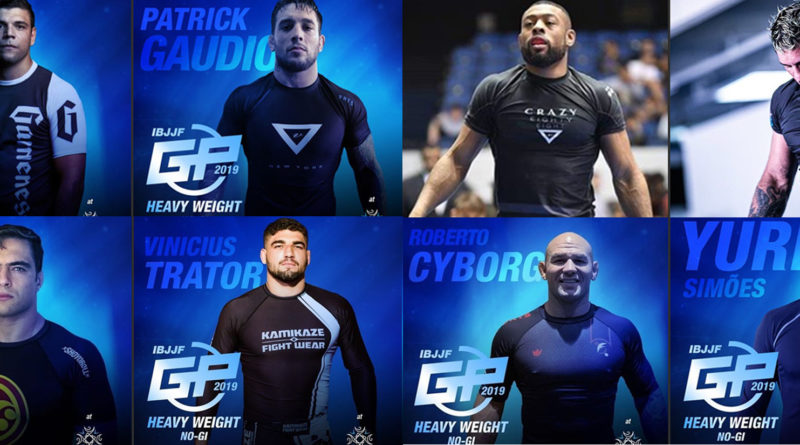 August 24th marks the end of the IBJJF World Masters championship, but also marks the start of Nogi season. The IBJJF Heavyweight grand prix marks the start of an intense few months of heavy nogi focus/competition for many of the elite BJJ competitors in the sport. With ADCC just around the corner 8 of the top heavyweight competitors in the world will battle it out for $40K. Substantial prize money in professional BJJ is very hard to come by outside of the Nogi super fight circuit and this should ensure the GP isn’t seen as a warm-up for ADCC.

The event has been plagued by pull-outs – with massive names like Gordon Ryan , Leandro Lo and Marcus ‘Buchecha’ Almeida all returning their invites. The tournament is stacked with eight solid names, and the brackets are set to deliver explosive matches from the get-go. Below we’ll look into individual athletes and dig deeper into first round matchups.

Probably the dark horse of the tournament ‘Rocha’ is someone who often takes people by surprise. He’s incredibly quick for a guy of his size and is incredibly durable – which he proved in his very controversial loss to Gordon Ryan at Kasai. Seasoned in high level nogi, he’ll be looking to make a statement ahead of competing in the stacked +99kg at ADCC.

Gaudio and his first round opponent (Rocha) have a common opponent in Gordon Ryan. Gaudio had one of the most exciting matches in the 2018 IBJJF No-Gi Worlds and came off victorious against what many consider to be the best nogi grappler in the world at the moment. Whilst being prolific on the Gi circuit, many would consider him to be one of the least experience in the Nogi format and this is his chance to break out ahead of ADCC.

Panza stepped in late (not as late as his opponent) for his long time team mate Marcus ‘Buchecha’ Almeida .  Interestingly, Panza is one of the more prolific leg lockers on the IBJJF circuit, with a multitude of wins in 2019 with straight ankle lock. I imagine he’ll be looking to capitalise on his opponents late entry and push the pace early.

The quintessential example of someone with everything to gain and nothing to lose. ‘Trator’ steps in on less than a weeks’ notice, replacing the injured Matheus Diniz, who felt the wear and tear from his tough match with Josh Hinger at Kasai Pro. He’s far less seasoned than his first round opponent, but has a monstrous work-rate and this match may be determined by who breaks first.

Most of the guys there, I’ve already beat. I don’t see any surprises. It’s gonna be a good experience, of course it won’t be easy. Three fights to win but I’m looking forward to that $40k. It would change my life

With 4 nogi world titles under his name, a super team behind him and seek-and-destroy style most of the top competitors in the game are touting him as the man to beat. That being said his first match is by no means easy…

Spriggs is long time competitor at the highest level and product of the old-school Lloyd Irving lineage. There’s not a lot to say really outside the obvious. Spriggs is gamer and ridiculously tough to beat – generally if you get the best of him it’s after a bit of a war where you’ll be worn out afterwards. Despite Hulk touting himself having beat ‘most guys here’ this actually is the first time Spriggs and Hulk have faced and many will be watching eagerly.

With 2 ADCC and 4 nogi world titles Yuri is one of the most accomplished no-gi competitors of all time. That says a lot and should speak volumes. With that in mind you’d think he’d be touted as the favourite for this, right? Well, no. Simoes has struggled for consistency as times and has losses to fellow GP competitors João Gabriel Rocha, Tim Spriggs and Patrick Gaudio. He’s a man for the big occasion and has proved himself on the biggest stage time after time, so I wouldn’t be surprised if he rose to the occasion as he’s done so many times before.

This event has been littered with pull-outs and ‘Cyborg’ took advantage of that and didn’t hesitate when he got the call to replace Leandro Lo . This match is of particular interest as it pits 2 ADCC champions against each other in the very first round! As far as I can remember this is the first time the two have faced each other and is a ‘fantasy match’ of sorts.

This event is pretty much the curtain raiser for nogi season as we head towards ADCC, Nogi Europeans and a bunch of nogi submission only shows. If you want to keep across all the latest news and live updates look no further than here!