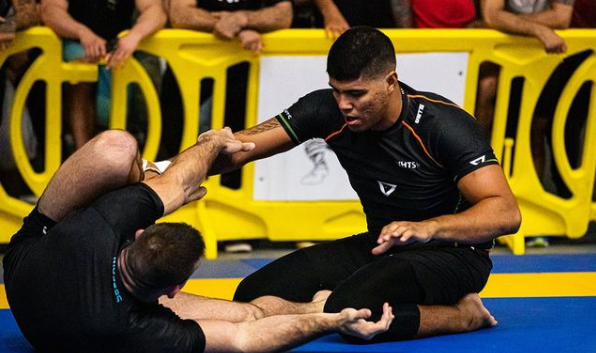 The 2021 IBJJF no-gi Worlds take place on October 7-10, with black belts competing on Saturday and Sunday. The men’s ultra-heavyweight division is the smallest adult black belt division, but potentially includes one of the events most anticipated matches. After going 1-1 against each other at the 2019 no-gi Worlds, Victor Hugo and Roberto “Cyborg” Abreu are now poised to meet again in the finals.

The full 2021 no-gi Worlds ultra-heavyweight division can be viewed here.

In order for the top-seeded Abreu and number two seed Hugo to meet in the finals, Hugo will likely first need to defeat 2020 Pans champion Max Gimenis. Hugo holds two black belt victories over Gimenis, most recently at the 2021 Pans, where Hugo won 6-0. On the other side of the bracket, Abreu’s most difficult match on the way to the finals will likely be ADCC veteran John Hansen. If both men are able to win their first two matches, they will grapple in the finals.

Hugo and Abreu met twice at the 2019 no-gi Worlds, and those matches set the stage for one of the most anticipated encounters at the 2021 no-gi Worlds. In their first match in the semifinals of the ultra-heavyweight division, Abreu chose to attack from open guard, looking to wrestle up to sweep. He found some success doing that, but it was Abreu’s last-second near guard pass that earned him a match-winning, tie-breaking advantage over Hugo.

The pair would square off again in the finals of the absolute division. That time, Hugo immediately sat to his guard and immediately inverted to a leg attack, securing a clean kneebar and what is probably the biggest accomplishment of his career — a Worlds absolute gold medal.

Since those matches, Hugo has lost just once in no-gi competition, dropping a decision to Kaynan Duarte. The Ribeiro Jiu-Jitsu product has put on substantial size, proving to be one of the division’s most athletic grapplers, able to attack from all positions.

An ADCC champion and one of jiu-jitsu’s longest-tenured elite competitors, Abreu has competed less frequently since the 2019 Worlds, but hasn’t suffered defeat once. He holds recent notable wins over Lucas Barbosa, Kaynan Duarte, and newly-crowned Who’s Number One champion Tim Spriggs.

How to watch: The 2021 IBJJF Worlds take place on October 7-10, and will air live on FloGrappling (subscription required).