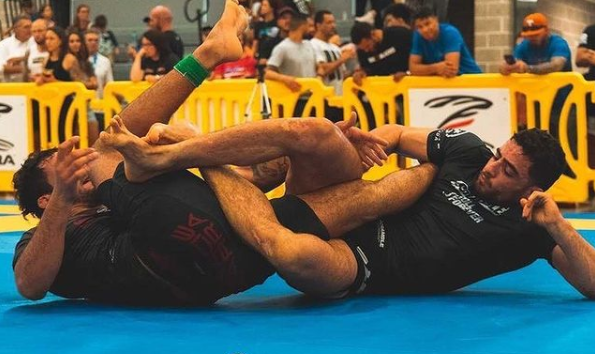 The 2021 IBJJF no-gi Worlds take place on October 7-10, with black belts competing on Saturday and Sunday. It is arguably the most anticipated IBJJF event of the year, and with the recently-instituted leg reaping and heel hooking rules, a number of top submission-only grapplers that previously avoided IBJJF competition will be competing this weekend, making for brackets that are loaded with top talent. One of those brackets is the men’s middleweight division, which might be the most stacked division of the entire event.

The full men’s adult black belt bracket at the 2021 IBJJF Worlds can be viewed here.

Below are some of the top competitors vying for gold at Worlds.

Dante Leon: The returning 2019 no-gi world champion, Dante Leon will look to again use his excellent wrestling and guillotine choke on his way to gold. Leon has been an active no-gi competitor since winning Worlds, with notable wins over Renato Canuto, Tye Ruotolo, and Davi Ramos. If he wins his first pair of matches, Leon could potentially face dark horses Oliver Taza or PJ Barch in the semifinals.

Hugo Marques: Marques is the number two seed and a 2018 no-gi world champion. He holds recent wins over fellow Worlds competitors Oliver Taza and Italo Moura, but he could run into problems early, as he could potentially face Unity Jiu-Jitsu’s Levi Jones-Leary in his first match.

Jaime Canuto: One of the field’s most active IBJJF competitors, Jaime Canuto. He is the number three seed and could square off with veteran Edwin Najmi in his first match in what would be a serious test.

Renato Canuto: Checkmat’s Renato Canuto is not only one of the field’s most entertaining grapplers, but also a real threat to take gold. A 2018 no-gi Worlds silver medalist, Canuto is well-positioned to make it deep into the tournament.

Oliver Taza: There is perhaps no bigger dark horse than recent ADCC Trials winner Oliver Taza. A submission-only and leg-locking specialist, Taza has recently shown drastic improvements to his wrestling that should serve him well in IBJJF competition. The number twelve seed, Taza will look to play spoiler throughout the tournament. He is looking at potential early match-ups against Italo Moura or PJ Barch, as well as a potential semifinal showdown with Dante Leon in what would be one of the event’s most anticipated matches.

PJ Barch: After a disappointing first go at IBJJF competition at the no-gi Pans, 10th Planet standout PJ Barch is once again a serious dark horse. With his high-level wrestling and superb leg locks, and coming off the BJJ Fanatics grand prix championship, Barch could very well take gold here. As the 28th seed, though, he’ll have an uphill battle. In order to make it to the finals, he’ll have to get past Italo Moura, and potentially Oliver Taza and Dante Leon.

How to watch: The 2021 IBJJF Worlds take place on October 7-10, and will air live on FloGrappling (subscription required).