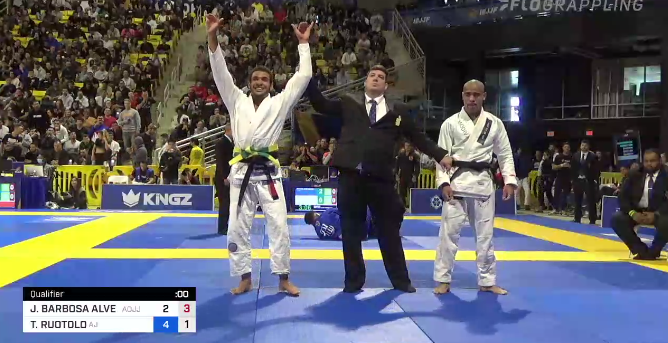 The 2022 IBJJF Worlds take place on June 2-5, live from the Walter Pyramid in Long Beach, CA. This is the premier gi tournament, attracting the best Brazilian jiu-jitsu competitors in the world. Adult black belts will be competing on Saturday and Sunday.

Tye Ruotolo might be the front runner for 2022’s grappler of the year. At the 2022 IBJJF Worlds, Ruotolo made his competitive black belt debut in spectacular fashion, defeating the top-seeded Jonatha Alves in his first match of the day.

Ruotolo’s first-round opponent Hugo Marques was unable to compete, and with Alves’ first-round draw, the two met in the second round.

Alves pulled guard early and attacked with a strong berimbolo attempt, nearly taking Ruotolo’s back. In typical Ruotolo fashion, wild scramble ensued with Alves eventually securing a sweep and a two-point lead with about seven minutes remaining in the match.

For the next several minutes, Ruotolo relentlessly attacked from his closed guard with loop chokes, buggy chokes, armbars, and even wrist locks. Ruotlo’s attacks nearly led to a sweep, earning him an advantage. In general, though, Alves hunkered down low to defend all attacks. That defensive posture led to three straight penalties for passivity, giving Ruotolo two points and a one advantage lead.

In the closing seconds, Ruotolo secured a sweep and the victory by way of points, 4-2 (1-0 advantage).

Ruotolo was a brown belt world champion — a title he earned by defeating his twin brother Kade. He is also a two-weight Who’s Number One champion and is coming off a spectacular d’arce choke finish over Garry Tonon in his ONE Championship debut. Ruotolo was awarded his black belt alongside his brother by Atos head coach Andre Galvao in December 2021.

An Art of Jiu-Jitsu representative, Alves is an accomplished competitor in his own right. He is a three-time Pans champion, has not lost in over a year, and holds notable wins over the likes of Mica Galvao, Andy Murasaki, and Jonnatas Gracie.

How to watch: The 2022 Worlds take place on June 2-5 and will air live on FloGrappling (subscription required).