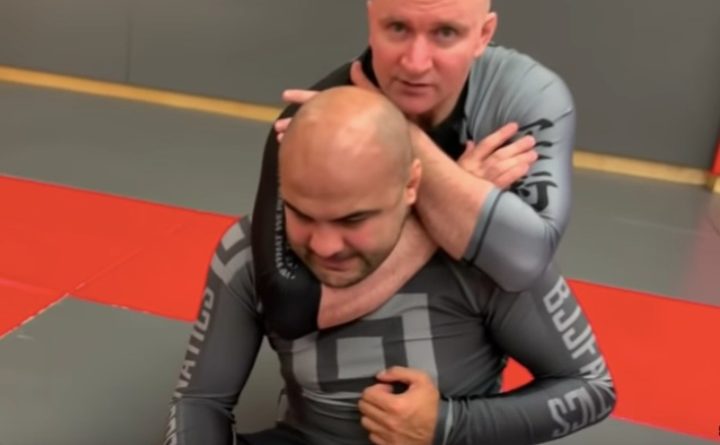 The back is – without a doubt – the most powerful position you can be in as a grappler as that’s where your opponent is weakest- they have no offence – so therefore can only focus on defence. Back control is a tough spot to get out of, mainly because of three things, one is the rotational control of the hips, the second is the restriction over the shoulders, and the third is the constant threat of submission; mainly consisting of strangles. This makes being on someone’s back an incredibly good position to be in, and also a great position to start subbing from.

Chokes or ‘Strangles’ as otherwise (more aggressively) referred to, are usually my go to submissions in BJJ because I’m frequently the smaller and weaker opponent, so as long as the choke is on right – it doesn’t actually need that much power. If your partner has really good defense when someone is on their back it can be difficult to finish them, but once you have the position, you’re already one step ahead in the game – take your time and find the finish. Below will behold three of the best BJJ chokes from the back, that are all applicable in both the Gi and No-Gi – therefore MMA as well.

This is the choke you will see used the most; on films, in the cage, and on the mats; it’s the most commonly used choke because it’s easy to understand and it’s quick to come on. The RNC is a finish you will see a lot in MMA. As soon as the fighter has their opponents back, very rarely will they mess around – they’ll be looking to secure that RNC – ASAP. During the first 168 UFC events the RNC made up the highest percentage of submission victories at 32%. The RNC is also the second highest percentage finish in Brazilian Jiu-Jitsu (after the armbar).

There’s a few defenses people can do to prevent you from getting their neck like grip fighting and shoulders up, chin down, but the video below demonstrates some great counters to the defense and some useful tips to help strengthen your RNC’s.

Below is an in-depth RNC breakdown with John Danaher and Bernardo Feria. In the video, Danaher goes into detail about; the attack, the defense, and further counters to the defenses. A simple choke which is incredibly effective.

The Short-Choke is a smooth adaptation from the RNC. If you’ve managed to swoop your arm across to the shoulder but are struggling to get your forearm for the RNC, you can still finish your opponent – with one arm – or if you can get your other arm to their back and go palm on palm you can finish your opponant with a choke called the short-choke. This particular choke is the perfect fall back option if you’re failing at an RNC/Collar Choke from the back. However, it can also serve as a set up for the RNC, as well as a fall-back option. The Short Choke BJJ submission is just that – a Short Choke. To finish it, all you need is a forearm across the neck – you can even do it with one arm if you like.

As we’ve previously established, the Rear-Naked Choke is possibly the most common and dominant choke in all of BJJ and MMA. Because the back is such an aggressive position, it allows for attacks to take place with little retaliation. Whilst the RNC is a great way to finish from the back, it is not always available. Against more experienced grapplers, they will often grip-fight and defend as much as possible. With this in mind, a different, yet similar, alternative option may be to go for the Short Choke.

Finishing the Short Choke BJJ strangle requires you to get a palm to palm grip over the shoulder, and place the elbow of the free arm behind the back. This creates a strong frame which makes it incredibly difficult for the opponent to move. For a tight finish, it is not just about the squeeze – you also need to pull across, in the direction of the elbow of the arm that’s across the throat.

It is unexpected, difficult to defend, and requires very little time to learn. Below you can see the Short-Choke explained in full effect with a transition to the back from a Head-in-Arm set-up. The instructor also shows and explains the difference between a RNC and a Short-Choke.

The set-up to get the Arm-In Ezekiel choke, again, is similar to the RNC/short-choke – but with an arm in. The Ezekiel is an incredibly versatile choke and can seemingly be done from most positions – including when you’re in someone’s guard. Aleksei Oleinik is a UFC fighter that has not only pulled off the Ezekiel choke twice but also did it from the bottom of the mount. Yes, that’s right, the first-ever UFC Ezekiel choke submission was actually from the bottom mount. Watch below:

The Ezekiel is commonly used in Gi but can also be done in No-Gi, and from many different positions – as proven by Aleksei Oleinik. In the Gi, the attacker grips their own Gi sleeve to secure the set-up but in No-Gi you use your bicep. You then do a scissoring motion that blocks the opponent’s trachea and/or the carotid arteries. The choke became highly popular in BJJ during the 1990’s as it is one of the few chokes/attacks that a top fighter can safely attempt from inside the guard of his opponent. The Ezekiel choke has many variations, the ‘Arm-In Ezekiel’ being one of it’s most commonly seen in high level competition.

The Arm-In Ezekiel works whenever you’re having a difficult or strenuous time finishing an arm triangle, or a choke from back control. However, the choke – albeit – mainly done in the Gi, can be done in No-Gi and it too is also incredibly effective like the two chokes mentioned previously in the article. The Grappling Academy show how the savage arm-in Ezekiel choke can be done from the back – Watch video below,