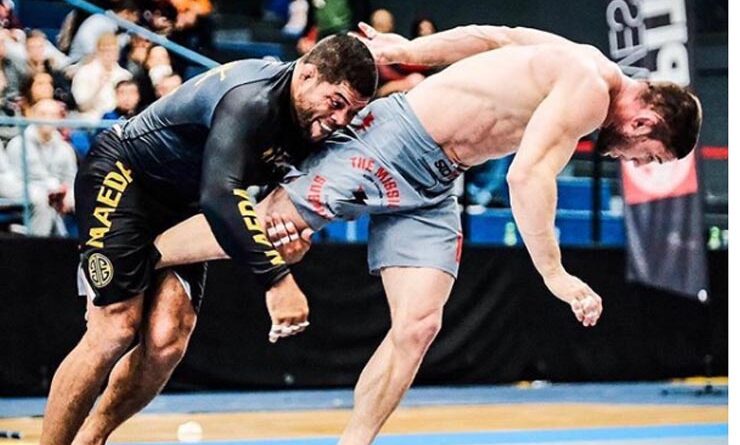 When it comes to takedowns, much like submissions, you want to create chains; therefore if one doesn’t work out, there is another one you can try from a failed outcome. The biggest crossover sport when it comes to No-Gi jiu jitsu is wrestling. Wrestling and grappling are very similar and can often overlap in parts that you can use to your advantage.

If you are a guard puller, that is fine, but if you train martial arts for self-defense (should that situation ever arise) you are going to need to know how to take someone to the ground in order for you to start working your submissions. Every grappler should be able to play the stand up game, and therefore have a few throws and takedowns secured under their belt and if you don’t, then you need to start learning.

The simplest takedowns are the single leg and the double leg takedowns when it comes to No-Gi. Sticking to the simple takedowns that are also highly efficient are your best bet when you aren’t that confident when it comes to the stand up game. You don’t need to know one hundred different throws and takedowns, just two or three that work well for you.

Note that for BJJ and Submission Wrestling you have to be careful about putting your head to the outside of your opponent’s body because it is illegal at IBJJF competition for white belts, and it exposes you to the guillotine choke. That being said, there is no 100% safe technique, and the head-outside position can offer some very strong takedown finishes if you move quickly and pass the guard.

There are some variations that you can make on this move if your opponent is defending it well or you are finding it difficult to finish it in the traditional way. You can lift their leg high in the air until they have to hop and then sweep their other leg with one of your own legs, or go for the single leg X and start working your way to back attacks or leg attacks.

The double leg takedown is one of the most common takedowns across grappling, wrestling and MMA. It is probably the first takedown most of us learnt. There are lots of different variations for the double leg, and more often than not, the biggest differences between these variations include head position (is the head to the side or in the middle of the chest) and whether you drop down to your lead knee as you shoot (the penetration step).

From a basic standpoint, the double leg requires you to create an entry with your opponents arms up, you then change levels, shoot in, and clasp behind both of their legs and take them to one side. However, there is a powerful way to defend the double-leg takedown and it’s with a sprawl. If you shoot too far away or with bad timing, your opponent will most likely sprawl and will begin snapping you down or trying to go for your back.

Once you are comfortable with the takedown, try to make sure you aren’t landing inside of your opponent’s closed guard. To avoid this try jumping off to the side as you land, and you should end up in side control. If you end up in half-guard, clasp their knees together with your arms, sprawl and do a leg hug pass.

Known as one of the top Aussie competitors of his generation, Australian grappler and Brazilian jiu-jitsu black belt under John Simon, Lachlan Giles explains how he does a double leg:

3. Arm Drag to Inside Trip

The arm drag gives you many options in BJJ, you can: take the back, hit submissions, and get takedowns and throws of it too. One of the most effective takedowns from the arm drag is the inside trip. Arm drags are effective because of the angles they create. BJJ Fanatics state:

“Whether it be Brazilian Jiu Jitsu, Wrestling or Judo, the arm drag opens up a lot of opportunities for those that use it. Why it works in the stand up phase of grappling, is because it allows for its user to create effective angles. Those angles that open up allow for takedowns to be done easier. The take downs are easier off of the arm drag due to the fact that your opponent cannot defend as easily, since they are being attacked from an angle.”

An arm drag gives you the connection you need to begin an effective takedown and gives you the correct angle to finish that takedown. It works with both judo and wrestling style takedowns, and enhances their success rate.

After your opponent is taken down, you are able to use a knee slice pass and get right to side control or if you have managed to keep your weight centered you could land in mount.