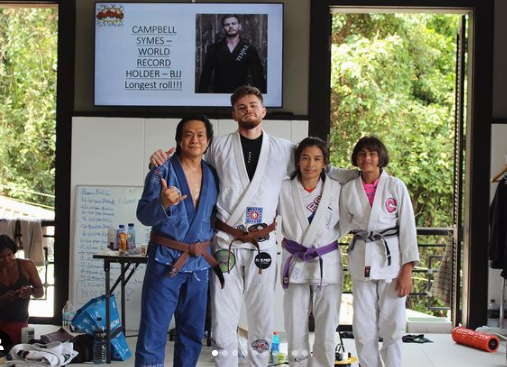 Symes is originally from a small town in Australia and moved to Thailand at the age of 16, where he started training under 5th degree black belt Olavo Abreu at Phuket Top Team academy in Chalong. The gruelling task took place in an effort to raise funds for a local gym, that like many, have been hit hard from the closures relating to the pandemic:

“I am attempting to break the world record for the longest BJJ Roll, to help raise funds for RDC Gym in Phuket, Thailand. RDC is a local Thai gym that has some of the best Jiu-Jitsu kids athletes in the country. When Covid-19 hit and we lost our Jiu-Jitsu home, RDC opened their doors to us, welcomed the team and also gave me a chance to teach these amazing kids. Now Covid-19 has really affected the gym, parents can’t afford training and the gym is on the verge of closing. Please help donate to the future of Thai Jiu-Jitsu, and bring a smile back to the kids of RDC Gym.”

The BJJ brown belt held the insane BJJ marathon at the new Temple BJJ academy in Phuket, Thailand where he is now coaching. Campbell divided up his time by rolling non stop for 4 hours and took short 12 minute breaks to go and sort himself out; whether that be going to the toilet, changing Gis, fuelling up, or getting a quick massage – no sleep though. Campell’s titles include IBJJF Pan Pacific, Pan Asians, Grappling Industries No-Gi advanced division, UAEJJF National Pro and many more.

Campbell has managed to raise over 100,000 baht which is equivalent to circa $3000/ £2200 – a huge amount – for the gym, but donations are still open so if you would like to show your support click here, you can also go on to Temple BJJ’s Instagram to view videos from the day of the monumental feat here.

Campbell started the first roll of the challenge with his instructor Olavo Abreu, watch here.

The previous 24-hour record was set by Damian ‘Obi’ Todd as a fundraiser to raise awareness for Mental Health and Sucide Prevention. Obi commented on the livestream of the record-breaking roll in support of Symes, “For everyone watching, after I’d finished my 24 hour roll, I couldn’t open a bag of candy… Campbell is doing a great job and I’m pleased to have had my record beaten by this young man.”

Congratulations Campbell Symes this is incredible!