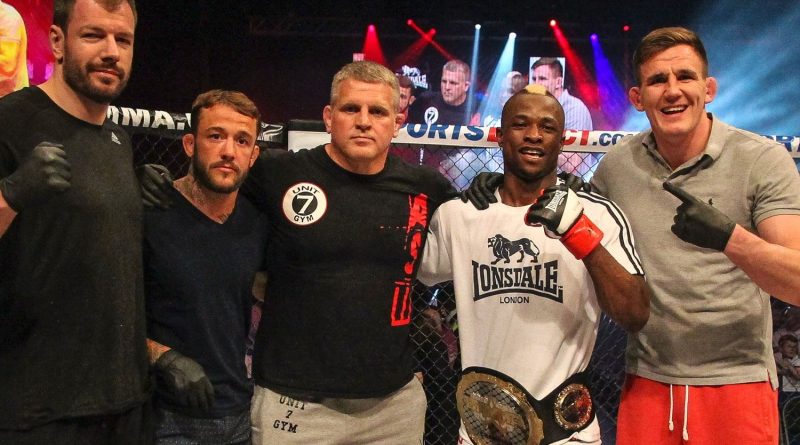 For those ‘in the know’ Daren has been a go-to guy for quite a while. Long-time head coach of ASW he’s coached an array of MMA stars (UFC vets, Cage Warriors champions and so on) and fronts up what is becoming quite a renowned bank of affiliate gyms that focus more on grappling such as ASW Manchester and Nemesis. He’s also co- founder of the rapidly growing Grapple Fest competition which feature top talent from around the world.

It’s hard to describe Daren as anything other than a savage. He’s trained extensively in a range of styles over his 30 years grappling and is probably the most slept on guy up north – this is through choice by the way. Daren is very much old school; you won’t see flashy Instagram technique videos, but what you will get is an absolute masterclass in how to mix catch-wrestling, Judo and BJJ together with savagery. Despite being 110kg+ he’s surprisingly nimble and can use an array of styles. I’ve heard rumblings of pure shock as he destroys someone smaller with spider guard in one roll and then switches his style against another big monster and submits them with a brutal catch technqiues. The best analogy I can give is we’ve seen stories of Gorillas being gentle when they want to, but at any moment they can choose to rip you to shreds.

Steve spent 8 years training at the Gracie Barra HQ in Rio, Brazil, where he was one of the first European black belts to receive all his grades in Brazil under the direct tuition of Carlos Gracie Jr. During coloured belts Steve competed frequently winning titles such as the Rio state championships at brown belt, before eventually becoming the 1st ever Mancunian black belt. As of 2008 Steve’s focus has switched more to focus on coaching. In 2008 he opened Stealth BJJ , a hugely respected gym nationally and internationally for both coaching and success in competition.

I promise you when I say this, I’m not just being biased here because Steve happens to be my coach. If you ask any black belt in and around the Manchester area they’ll tell you he’s an absolute master of the art with many of the head coaches from other gyms in and around Manchester having had private lessons with him at one time or another. As with much of this list, Steve has trained in a range of styles, having started way back in 1989 . The attention to detail in his teaching is the big stand out you’ll notice, as well as the fact his game is still constantly evolving as he delves deeper into ‘newer’ (nothing is really new) techniques in sparring / drilling to aid his teaching.  Also, bonus tip… you’ve heard Darren Till speak Scousetuguese, ask Steve to recall some tails of brazil and marvel at his Manctuguese.

A product of the renowned CSKA sports school in Bulgaria Lyubo is a multiple times Bulgarian National Wrestling Champion and NCAA Outstanding Wrestler Award Winner. Titles sound impressive, but the big marker is when the GOAT asks you to be the wrestling instructor at his academy. Lyubo has been the long time lead wrestling coach at Roger Gracie HQ in London and before Roger retired was one of his main coaches/sparring partners for the stand-up part of his game.

Lyubo is an excellent coach and breaks down minute details in wrestling that make a huge difference. Outside of wrestling he’s also known for using a relentless pressure style, with a lovely dose of brutal neck/spine cranks mixed in.

One of the early spearheads of spreading the 10th Planet system throughout the UK Mick was awarded his black belt by Eddie Bravo in early 2019. Broster began training in 1996 and currently heads up the Birmingham, Redditch and Banbury 10th Planet affiliates.

The 10th Planet Man is one of the stereotypical ‘BJJ secret killers’ and is unassuming looking by nature – certainly not what you’d expect a fighter to or a martial artist to look like. Although known for his technical proficiency and ability to teach Broster recently returned to the MMA at the age of 51 and won via first round submission.

Phil is probably the definition of a hidden gem for the UK and even people who have been in the community may not recognise his name (or may have forgotten about him). He likes to fly under the radar and actually came as recommendation from Steve Campbell as they lived together for a while in Rio.

He spent many years living in Japan and training under Axis founder Takamasa Watanabe at the Axis Jiu Jitsu headquarters in Tokyo, who also awarded him his black belt. One of the few black belts in the UK under the Rickson Gracie lineage, Yeomans is a multiple time Rickson Gracie Cup gold medalist and competed frequently in the 00’s. Footage of someone who likes to fly under the radar is very hard to find online, but from the matches I’ve managed to find he look like a very early adopter of the leg lock heavy game we see today.

As of now he is head instructor of Axis Jiu Jitsu in Cambridge, UK and runs a team that can regularly be seen competing at local UK competitions.