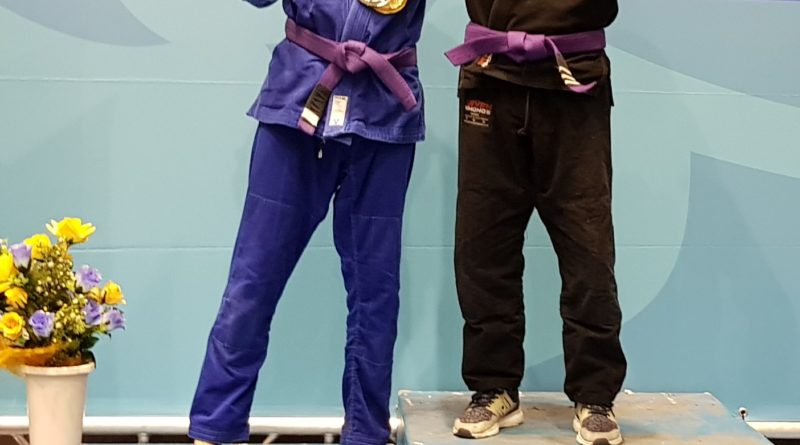 I’ve “done” Barcelona before, at least the bits I wanted to, and I’m also a penny-wise Scot, so for me to be sufficiently motivated to drag my old bod back, there had to be something of a carrot. As it turns out, my 61st birthday corresponded with the IBJJF European Masters in the Olympic Stadium, one of the few events on the competition circuit where a fight or three at Masters 7 is pretty likely. On top of that, Mrs Grumpy, my 52 year old child bride, and herself a bjj purple belt, expressed a semi-interest in trying her 1st comp (and doing some big city shopping) – game on.

If you’re a city break kind of person Barcelona is right up there, Gaudi’s Architecture is ever present, and there’s other good stuff too, but I’m far too unhelpful and disinterested to get into that, so if you want to know more, feel free to google it.

Mrs GOG booked us a pretty good, central and reasonably priced hotel. The Ayres in Plaça d’ Espanya, is 20 minutes by subway from the arena, so nothing to complain about there. We ate birthday pizza with an old friend and my default grumpiness temporarily subsided to that of a normal ill-tempered old man, but then we went to the stadium and it was all downhill.

Well FFS…… I am generally a fan of the IBJJF, I’ve contacted them on several occasions; when I needed to update my registration to make a competition deadline, to get a new membership card after I left mine at the podium in Rome, etc. They’ve always responded to my messages promptly, and sometimes, with a bit of humour. I understand they’re not non-profit and they can’t please all of the people, but their events are generally well-run and with the integration of live online updates seemed to be improving.
Now I’m not here to tell you about the flash cart-wheeling guard passes the big names produced, but I’m sure as hell going to give you my old man perspective. The 3rd IBJJF European Masters was a fire in a dumpster.

According to event literature, athletes should be changed and ready to fight 1 hour before their scheduled time, in case preceding fights have finished early (although with real-time updates available on your mobile, I’m not sure that should be necessary), but that’s the rules; anyway, when we arrived at around noon, there was zero activity on the mats. Nice new looking mats, and busy event, but no fighting, seems the central computer had been down for an hour, and so were all tools. I know IT systems can go tits up, and it’s churlish to blame the operator, but when your customer base has largely flown in for the day, maybe have a plan B.

Another couple of grumbles: You hired an Olympic Stadium for a fully-subscribed sporting event, so expect the competitors and possibly the odd spectator to want to use the toilet. That’s only possible if they are unlocked. Half of the loos were inaccessible and the remainder ankle deep in pee and soaking tissue. Does no-one actually take responsibility for that kind of thing?

In evidence-based 2019, we understand the link between injury risk and failing to prepare ourselves for sport. Mrs GOG even had her gi to hand, as she always likes to warm me up before more strenuous activity, but disappointingly, that proved to be impossible and I lost count of the number of other competitors complaining that in a modern facility, and at a 4* event like the IBJJF European Masters, there wasn’t just a lack of warm-up room, there wasn’t even a bit of useable matting. I heard one official advising, “You are free to warm up wherever you wish”, well where then?

For an older grappler, particularly a cantankerous old boy like me, no clean toilet and no place to stretch tight ligaments is particularly bad and it was a Master’s event after all!

Following a false start or two, and maybe another hour’s delay we finally kicked off with some jits. Now what I completely fail to understand is how this minor fiasco escalated into actual BJJ comedy. By the time we were choking and arm-barring each other again, the IBJJF European Masters was running a mere 5 hours late, and when we left the stadium at 10:00pm ish, after my “4:00pm” open category fight, there were matches scheduled to start as late as 1:31am! Given that many competitors had lost heart or rushed for their flight earlier, significantly thinning the number remaining, what on earth went wrong?

As I said, I think the IBJJF do a pretty good job most of the time, but this event sucked harder than the rude metaphor I’m imagining. It’s probably not reasonable to expect a match coordinator to be able to fix a central computing system, but maybe they should know someone who can.

John A Murray is The Grumpy Old Grappler, a native Scot he now lives on Cyprus and is the oldest member of Palestra BJJ in Nicosia. Aged 61, John started BJJ at 56. He trains 4 days per week, is a purple belt who competes regularly and is genuinely grumpy and intolerant.