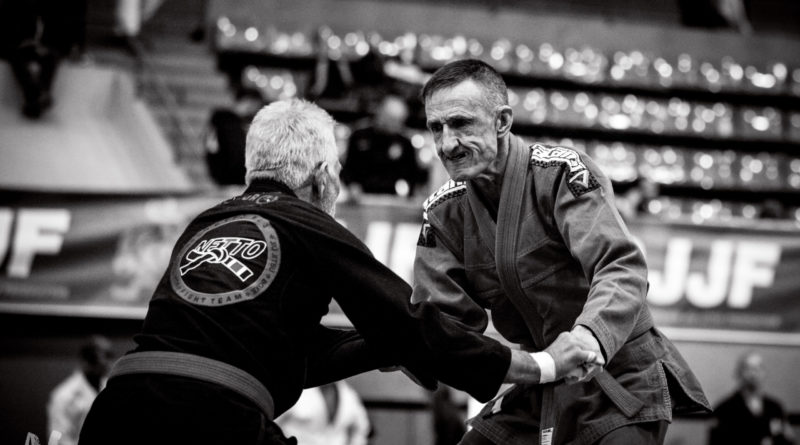 A year ago, we changed our car. We got a good deal on a Honda Civic, a make and model I’d never considered before, yet since then, every second car I see seems to be a Honda. Discovering and beginning Brazilian Jiujitsu has been a similar experience. Until recently it was an unknown, but now broken ears and taped fingers are everywhere. It’s as if I’ve exited Earth and landed on Planet Jits.

I’ve been around for 61 years, and in that time, I’ve worn a number of different hats and enjoyed the brotherhood of several work & sports groups, but jiu-jitsu isn’t like any of these. After more than 5 years on the mat I’m still something of a duck out of water, not the real world experienced older surgeon revered by my juniors, or a cool-headed rock-climbing instructor offering reassurance on a ledge a long way off the ground. Now I’m just gangly and badly coordinated, I always hurt, sometimes in multiple places, I watch young dudes and dudettes master anatomical spaghetti that I can’t make sense of, and often I want to cut my losses and go climbing or dust down my golf clubs and do something that doesn’t humiliate me publicly and repeatedly, but I don’t. Here I am, still doing 8 sessions a week, and battling to make a change more meaningful than the size of my ears.

BJJ is growing in popularity, it’s everywhere, certainly if you’re an insider it seems to be. If you can apply it, it’s a self-defence system “par excellence”, train regularly and you will get fitter, stronger and more flexible, it’s both exhilarating and mentally challenging. I’m less convinced however, of its “Keep it Playful”, “Jiu-jitsu is for everyone” marketing model, in which we’re led to believe that BJJ is some form of, easy self-defence yoga to be practised until you are 120. Helios Gracie and other old masters are touted as examples of a “BJJ for life” clan, but without wishing to denigrate the effort & skill of these elder statesmen, if you’ve been embroiled in any pastime since your youth, it’s going to feel a damn site easier than it will for an untrained oldie trying to accelerate hard to keep up with a class overflowing with athleticism. For the old and broken amongst us, the key to accessing the new you is hard work and consistency and that won’t feel easy, but the rewards are there, and for someone who wants to be more than just good at exercising, this is the more.

When I started BJJ, I was 56 years old, Janey, my wife was 48 and we were looking for an evening activity to replace Kungfu classes, which had ended badly with a blazing row between me and my sifu, but that’s a story for another day! We already tried to eat sensibly, walked around 5 miles per day and climbed regularly, so were neither particularly out of shape, nor candidates for a “jiu-jitsu saved my life” story; in fact, with some martial arts training in my past, I had a small & secret inkling that I might show these BJJ boys a thing or two! Maybe because we weren’t obviously plump or puny, we hadn’t realised how biologically old we’d become and that was a rude awakening. For the first 12 weeks of lessons, we couldn’t sit in “seiza”, roll forwards or hold some of the simplest positions. I discovered that at some un-noticed time, I’d lost the ability to touch my toes and after any class involving take-downs or repeated stand-ups, our legs and backs would ache for days. I guess these were normal, gradual degenerative changes, but I hated them. Progress was slow and painful, and it was ironic that having started a new sport feeling reasonably youthful, I now felt utterly decrepit.

Never had I imagined that any aspect of my performance (apart from a need for reading glasses) might be limited by age, but in jiu-jitsu I was forced to face that possibility. Unsure of how to respond and too stupid to consider an easier life, I adopted a “just do more” approach. We added a Saturday morning to our 3 day per week schedule and made sure to follow every fundamentals class with an advanced one. I gave some thought to the attributes of younger athletes; explosivity, strength, flexibility and the ability to assimilate new knowledge easily and I made a plan.

I dusted off my weights and added 3 sessions of strength training, I stuffed an old wetsuit with unwanted T-shirts thereby making a rudimentary grappling dummy to strangle at home, and I began to stretch daily, take private lessons and to download the excellent Grapplearts Apps for personal study. My grips were and are my major asset, forged by years of rock-climbing, I could certainly hang on, in fact my challenge was knowing when to let go. In time, slow progress was there, but so were new problems; as John F Kennedy said, “The rising tide lifts all boats”. While I improved, so did my young spinning and cartwheeling classmates, although I was stronger and more flexible, it wasn’t enough and new injuries were frequent and frustrating. The worst of these brought on by a crazy attempt to build up to 1,000 push-ups in a day. On the day I reached 550, I was stricken by terrible bi-lateral rotator cuff pain, and movement so restricted that I couldn’t raise either hand above shoulder height for over a year! Then there was the spectre of competition. When I started BJJ, I didn’t know that competing was “a thing”, now the need to fight consumed me. I was both terrified of being crushed and humiliated and at the same time of hiding from what seemed to be a vital test.

On the very positive side, the support of my wife Janey, my team-mates at Palestra JJ and my coaches Andreas & Alex has been unselfish & unrelenting. The English Poet John Donne commented that, “No man is an island” and that has been nowhere truer than on this grumpy old grappler’s jiujitsu journey.

John A Murray is The Grumpy Old Grappler, his healthy life balance involves splitting his time equally between doing jiu-jitsu and complaining about everything else.

All images courtesy of the great Maggie Left.