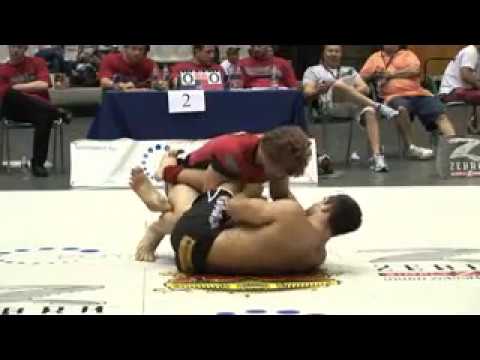 There is a common misconception that is continually perpetuated in the grappling community, many feel like wrestling beats jiu jitsu and quite honestly there is some truth to this statement. If you watch white and blue belt tournaments, you can see just how much of an edge a decent wrestler has, but as we get to the upper echelons of grappling, it seems like an amalgamation of styles is best, but a base in jiu jitsu is optimal.

Ben Askren is one of the biggest names in wrestling and MMA. On Saturday night, Askren made his UFC debut and while he won by a contentious technical submission, he showed poise and overcame early adversity. Askren’s grappling acumen is beyond dispute, he is a 4-time All American,a 2-time NCAA champ and an Olympian. Despite Askren’s successes, many people forget his trip to ADCC in 2009.

ADCC 2009 was a treasure trove of future MMA stars, Chris Weidman, Ilir Latifi and Gunnar Nelson all appeared to varying levels of success, but in this article we are going to focus on Ben Askren.

Ben Askren has stepped onto the mats thousands of times, so when he first walked onto the mats in Barcelona there must have been a sense of familiarity. While the rules were different to Askren’s norm, he had decided to leave wrestling behind after the 2008 Olympics and ADCC was one step on his journey towards MMA. Askren’s first opponent, Toni Linden, was a talented Finnish wrestler, but was no match to the wrestling and top game of Askren. Eventually Askren worked his way into an arm triangle and finished his foe. Askren’s had secured his place in the next round, but his opponent would be a different beast.

Like all sports, there are levels in Brazilian Jiu Jitsu and Pablo Popovitch is the truly one of the greatest of all-time. Though Askren was game and came out on the attack, Popovitch secured a beautiful transition to a toe hold and forced Askren to tap.

In many ways it is a shame Askren was pitted against Popovitch so early, Askren had an interesting style and it would have been fun to watch him compete more. Popovitch would tear through the rest of the field before eventually beating Marcelo Garcia in the finals.