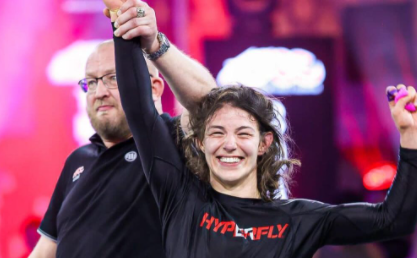 The mayor of Montreal recently sent a letter to ADCC silver medalist Brianna Ste-Marie, officially congratulating her on her accomplishments.

Elite black belt competitor Brianna Ste-Marie made history at the 2022 ADCC World Championships, becoming the first-ever Canadian to medal at the prestigious tournament.

It wasn’t just grappling and jiu-jitsu fans that took note of Ste-Marie’s accomplishment.

Valerie Plante, the current mayor of Montreal, recently penned a letter to Ste-Marie to recognize her achievement and congratulate her on behalf of the city Ste-Marie calls home. View that letter (on the second slide), posted to Instagram, and an English translation below.

It is with true Montreal pride that I wish to express to you my enthusiasm following your victory at the last world grappling championship. First Canadian medalist at this competition and athlete honored more than once on the podium, you contribute to the spread of your sport in the most beautiful way.

Behind each victory and each title belt, I detect your discipline, your sacrifices and your enormous passion. This determination commands the greatest respect. The significance of your success at the 14th ADCC (Abu Dhabi Combat Club) Submission Fighting World Championship is, however, historic. At 26, you have already made national grappling history and the future is just as promising.

On behalf of Montrealers, I congratulate you on your performance. In the process, I also underline the importance of your achievement for a more active metropolis, in particular through the various Brazilian jiu-jitsu courses that you offer to the population.

Wishing you a long career at the height of your ambitions, please accept, Madame Ste-Marie, the expression of my distinguished consideration.

While it’s noteworthy any time a high-level public official recognizes the accomplishments of a submission grappler, this letter is particularly special because grappling and BJJ competitions are not currently legal in the province of Quebec, where Montreal is located.

A 2013 amendment to Canada’s criminal code made all amateur combat sports illegal unless and until each respective province legalizes them. Other provinces, including neighboring Ontario, have since legalized jiu-jitsu competitions, but Quebec remains behind.

Still less than a year into her black belt career, Ste-Marie is one of the top pound-for-pound grapplers on the planet. The Brazilian Top Team representative captured gold at the ADCC East Coast Trials (an impressive feat which nonetheless did not qualify her for the ADCC World Championships) as well as the ADCC West Coast Trials.

At the ADCC World Championships, Ste-Marie defeated European Trials winner Elvira Karppinen in the first round before beating returning champion Bianca Basilio in one of the event’s most dramatic matches. In the final, the Canadian suffered a hard-fought points loss to Ffion Davies.

Not one to take a long rest, Ste-Marie is slated to return to action on November 11 when she faces fellow ADCC competitor Mayssa Bastos in a submission-only match at Who’s Number One.