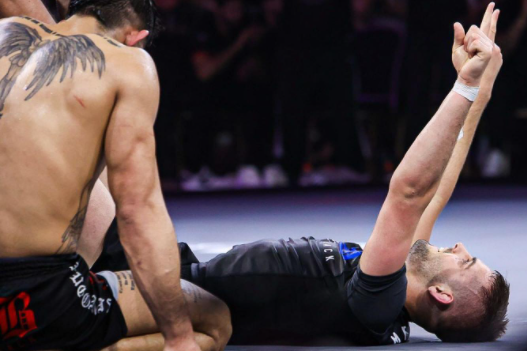 The ADCC West Coast Trial was one of the biggest and best tournaments in grappling history. Because there was just too much action to cover at once, we’ll be spreading out our coverage of the event in several posts. Be sure to check back for results and recaps from every division at the ADCC West Coast Trials. View the recap of the 66 kg. division here.

Brazilian Fight Factory’s William Tackett came into the West Coast Trials as the number one seed in the 256-man 77 kg bracket. Tackett lived up to the lofty expectations, submitting five of his seven opponents to secure his spot at the 2022 ADCC World Championships.

A dangerous leg locker with excellent takedowns, Tackett submitted each of his first five opponents, including Serra BJJ black belt Nick Ronan in the round of 16 and ADCC veteran Jon Satava in the quarterfinals.

In the semifinals, Tackett faced Serafin Jiu-Jitsu’s Chris Wojcik. The unseeded Wojcik has used his quality wrestling and top game to play the part of spoiler up to that point, defeating number-four seeded Kody Steele and number-five seeded Kieran Kichuk on his way to the semifinals.

Wojcik’s underdog run would end there, though, as Tackett was able to shut down Wojcik by a score of 4-0.

In the other semifinal, 10th Planet standouts PJ Barch and Andy Varela went to battle in an entertaining match, with Varela securing the referee’s decision. Varela had impressed throughout the weekend with victories over Magid Hage and recent EBI winner Alan Sanchez.

In the final, Tackett again showed off the full breadth of his jiu-jitsu game, defeating Varela by a score of 4-2. Even in defeat, Varela’s stock rose significantly, as he demonstrated that he is neck-and-neck with, if not better than, established elite competitors. Varela is a contestant on FloGrappling’s upcoming reality show, Who’s Next.

As for Tackett, this will be his first ADCC World Championships. He had placed second at the previous two North American Trials events.