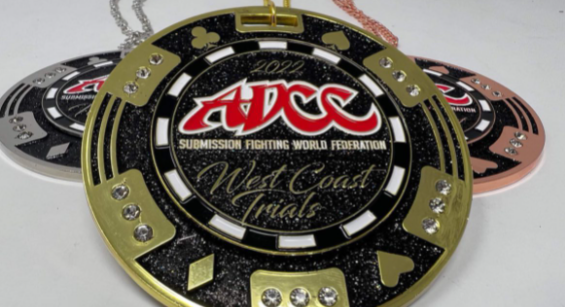 The ADCC West Coast Trials take place on April 2-3 in Las Vegas, NV. The event will be the largest-ever ADCC Trials, with at least one division at full capacity with 256 competitors. For North American grapplers that do not receive an invite, this will be their last chance to punch their ticket to the 2022 ADCC World Championships.

More than just a massive tournament, each division features elite competitors. These are the main players to watch at the West Coast Trials:

All eyes will be on three-time Trials silver medalist Keith Krikorian, who comes into the tournament with plenty of momentum following an entertaining unanimous decision win over Gabriel Sousa at Who’s Number One (WNO). The 10th Planet black belt has been painfully close to Trials gold in each of the past three North American events, and he’ll come into this one as an early favorite.

At the East Cost Trials, 2021 no-gi world champion Gianni Grippo fell to Krikorian in the final seconds of their semifinal match; Grippo is a dangerous back-taker that is again expected to make it deep into the tournament where he may see another showdown with Krikorian.

The 77-kg. division was at maximum capacity weeks ago, and is arguably the most talent-rich bracket of the event. Two-time Trials silver medalist William Tackett has not competed since losing to Kade Ruotolo in the finals of the East Coast Trials. Tackett’s game is well-suited for ADCC rules; he is a more-than-competent wrestler with a dangerous leg lock game and a seemingly endless gas tank.

If Tackett again makes it deep into the tournament, he’ll face plenty of stiff competition along the way. Magid Hage turned heads at the South American Trials where he went on a submission tear to earn second, and he’ll look to use that momentum here. Similarly, Canadian grappler Kieran Kichuk is coming off a spectacular performance at the Emerald City Invitational where he defeated Gianni Grippo and Josh Cisneros. In a similar vein, 10th Planet black belt Alan Sanchez comes into the tournament following a championship performance at the Eddie Bravo Invitational.

ADCC veteran and 2019 Trials winner John Combs has a game that seems tailor-made for the ADCC ruleset. His high level wrestling, guillotine, and relentless pace make him a favorite to make it to the finals.

Fresh off a spirited performance against Gordon Ryan, Daisy Fresh’s homegrown talent Jacob Couch is an early favorite to capture gold. Couch earned third at the East Coast Trials on the strength of his elite leg lock game. Look for Couch’s opponents this weekend to try to test his wrestling.

Another grappler to watch is David Garmo, who, despite a recent submission loss to Couch, has the skillset to make waves in the division. In a similar vein, keep an eye on Legion American Jiu-Jitsu’s Sloan Clymer, who has a takedown and front headlock game that could give more widely recognizable competitors problems.

Although he is coming off a submission loss at WNO, Checkmat brown belt Elder Cruz will be a favorite at 99 kg. He is a relentless wrestler with an elite-level top game — a skillset that is perfectly suited to the ADCC ruleset. Look for Cruz to try to impose his wrestling advantage throughout the tournament.

Standing in his way will be no-gi world champion Devhonte Johnson. Johnson came up just short against Mason Fowler in the finals of the East Coast Trials. He is a talented takedown artist in his own right, and after an incredible year of competition in 2021, seems poised to take home gold here.

Damon Ramos impressed at the East Coast Trials where he earned second place. He’ll look to turn heads again this weekend, as his fearless and sometimes unorthodox submission attack will be a threat to all competitors.

In terms of a more well known competitor, keep an eye on 10th Planet black belt Kyle Boehm. Boehm has shared the mats with the best of the best and is a serious submission threat from his back, which is a special skillset in the heavyweight division.

Simply put, the women’s divisions are overflowing with talent. This is the only chance for North American women to qualify for the ADCC World Championships.

Brianna Ste-Marie burst onto the scene in 2021 with big wins in combat jiu-jitsu, then winning the East Coast Trials. Earlier this year, she beat Amanda Alequin to capture the WNO bantamweight title. Ste-Marie is a methodical, position-based grappler that has proven herself in this ruleset and will understandably be a favorite.

Another name to watch is the white-hot Sophia Cassella. Trained by Jason Rau and Tom DeBlass, Cassella won the Medusa strawweight tournament earlier this month, only to follow that performance up with the fastest submission in women’s WNO history last weekend. If Cassella is able to get to her preferred leg entanglements, she is a real threat against any opponent.

The odds-on favorite here will be East Coast Trials champion Kendall Reusing. A 2019 no-gi Worlds double gold medalist and Polaris champion, Reusing is arguably the division’s best wrestler — a skill that she has used well throughout her career, particularly under ADCC rules.

Reusing may run into trouble if she faces Elisabeth Clay. Clay is a guard player and submission hunter, and has twice defeated Reusing as a black belt.

Another name to watch in this division is Erin Harpe, a blue and purple belt world champion that burst onto the scene in 2021 with wins over Maggie Grindatti, Rafaela Guedes, and Amanda Leve. Harpe sets an incredibly high pace and will certainly look to wear down her opponents, especially as she makes her way deeper into the tournament.

How to watch: The 2022 ADCC West Coast Trials take place on April 2-3, and will air live on FloGrappling (subscription required).