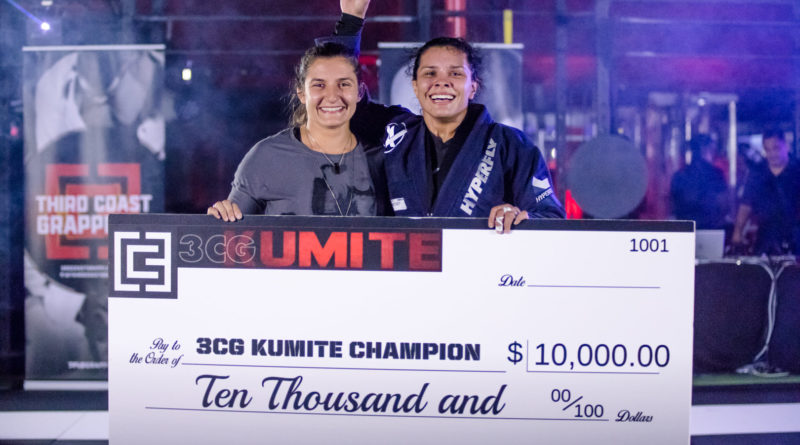 All hail the Queen of the Kumite! Third Coast Grappling (3CG) Kumite 7 was the last event of the series that spanned four months amidst a worldwide pandemic. Eight elite female competitors went all-in for the $10,000 prize and a title that will never be disputed. They showcased the best of women’s Jiu Jitsu and they did not disappoint. Read on for the recap of the action from the wonder women with 18 world titles combined.

Standing in front of each other prior to the start of the match, the size disparity was glaring. And that is with the 25 pounds that De Jesus was said to have cut just to be able to compete in this card. Starting the action, De Jesus pulled guard followed by Bishop. On the ground, Bishop made multiple attempts to get in 50/50 and other leg entanglements, but De Jesus prevented her from solidifying and attacking. De Jesus managed a leg drag and Bishop attempted a kneebar. With Bishop’s back partially exposed, De Jesus attempted an Ezekiel choke. Bishop postured up which led to De Jesus falling over. With Bishop on top, she attempted a double-under, but De Jesus nullified it. As regulation ended, the score was even at 2-2. De Jesus chose to start from closed guard.
De Jesus advances by scoring golden points in overtime via a well-timed lumberjack sweep.

Starting off, Swanson pulled guard. Monteiro wasted no time working on passing. She managed a tight knee-slice with an underhook ending up on three-quarter mount with two underhooks. Eventually she freed her trapped foot to get to side mount. Swanson looked like she was going for a lapel choke. Monteiro sat up to a possible armbar, but Swanson escaped and ended up on top. At this point, Monteiro led 5-0 with four minutes left. When Swanson sat back, Monteiro stood up and earned two additional points and then three more for passing to side control once more. When Monteiro moved to the other side, Swanson took an opportunity to attack, going for a toehold. Monteiro gamely defended, and in the ensuing scramble, Swanson’s right leg was trapped in a crab ride/calf slicer. With 10 points and almost two minutes left, Monteiro maneuvered to Swanson’s back, reached her throat and got the tap.
Monteiro proceeds to the semifinals.

Vieira pulled guard and immediately went for a two-on-one grip on Montrezor’s right arm. It seemed like Vieira was going for a cross-sleeve armdrag to side guard. Then she got a gift-wrap while setting up a straight armlock attempt on the other arm. As Montrezor defended against it, she jumped over to alleviate the pressure. Vieira rolled with her to end up with a sweep and a mount for six points total. Vieira once again applied tremendous pressure on Montrezor’s arms, at one point getting to a technical mount. Then the attack: Vieira went for an armbar, but Montrezor defended. Vieira switched to knee-on-belly worth two points while applying a cross-choke, then back to mount for four more points. This sequence secured her the win via tech fall with 12 points overall.
With this win, Vieira went on to the semi-finals.

The match started with a double guard-pull. As Ribeiro leaned to her left side, Cintra attempted an Estima lock on her right foot. The referee stopped and penalized them for stalling, then restarted them at the standing position. A few seconds later they were in the same exact positions, then stopped and penalized again. This time each was awarded two points for each others’ penalties. After the second restart, they both pulled guard again. Cintra appeared to be the more aggressive, coming up, attacking and actively trying to pass Ribeiro’s guard. Calm and measured, both competitors were obviously averse to taking unnecessary risks with four minutes remaining. Cintra, carefully and thoughtfully applied pressure, but Ribeiro was just as careful and thoughtful in her defense from inside her lasso guard. With less than two minutes remaining, as Cintra stood again, Ribeiro launched a two-pronged attack, going for what looked like an omoplata or triangle. Cintra defended and pressured forward even more as Ribeiro started to get more assertive. With 45 seconds remaining, Ribeiro went for a footlock attempt that Cintra fended off as time ran out.

At overtime, Ribeiro elected to start from her closed guard. Both were active in their positions, Cintra in passing Ribeiro’s guard and the latter in defending as well as guard recovery. With two minutes left, Cintra managed to stack Ribeiro with extreme pressure on the latter’s right calf and foot. Thirty seconds later, Cintra switched to the leg drag position, looking for Ribeiro’s back. Then Ribeiro chose to attack Cintra’s exposed left leg, but they ended up in 50/50 with Cintra still on top. With 45 seconds to go, Ribeiro tried to pursue and get to Cintra’s back as Cintra worked to keep her posture and top position. Fifteen seconds later, Cintra went on the attack, diving for Ribeiro’s foot in a belly-down footlock. A scramble ensued, but Cintra was in an unfavorable position as her back was to Ribeiro, who took full advantage, went all out and earned golden points in overtime.
With this win, Ribeiro qualified for the semi-finals.

De Jesus pulled guard to start the action. A back-and-forth sweep-for-sweep action ensued until the scores evened at 6-6. Monteiro attempted a toe hold with 36 seconds left in regulation. When De Jesus stretched her leg to defend, Monteiro switched to a kneebar, getting the tap with about 22 seconds remaining. Monteiro moved on to the Finals.

Ribeiro pulled guard to initiate the match and succeeded at maintaining it and preventing Vieira’s attempts at passing. They went into overtime scoring 0-0. Vieira chose to start from closed guard. When Ribeiro started to open the guard, Vieira got up to attempt a single-leg takedown. Ribeiro stuffed it, until Vieira managed to maneuver to get a body lock from behind. She managed a takedown, but failed to establish any control until she went for an armbar. Ribeiro, defiant, defended successfully and ended up on top so no points were awarded. (It may be confusing to some, but those are the rules.) As time ran out, it went to referees’ decision for Vieira, moving on to the finals.

Twenty seconds in, Monteiro pulled guard. True to her style, Vieira applied forward pressure the entire time. At one point, Monteiro switched to the so-called De La X guard, but Vieira nullified it. Vieira went to stack and turn Monteiro over, but the latter managed to get up. With 70 seconds remaining, the two ended up standing face to face again with zero points between them. In overtime, Vieira chose to start from the standing position. Monteiro pulled guard again and the two were back in the position they spent most of regulation. One minute later, Vieira attempted passing Monteiro’s guard quite aggressively and the latter maintained and recovered her guard. Monteiro switched to single X guard, but Vieira’s base and balance proved to be too solid as she stayed on top. With tremendous forward pressure and stacking, Vieira remained in a solid and safe position until the last five seconds when she attempted an ankle lock as time ran out. The referees decided for Vieira’s unanimously. Third Coast Grappling’s Queen of the Kumite and $10,000 richer is Ana Carolina Vieira.