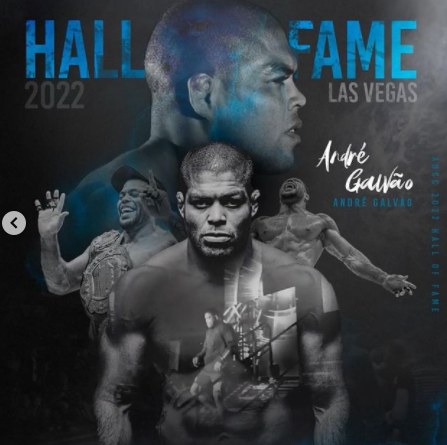 Andre Galvao has now become the second competitor to be inducted into the ADCC Hall of Fame, and he will be joining fellow BJJ legend Roger Gracie. The organization announced the news on Monday, and will announce additional new members each Monday.

Roger Gracie is the only person in ADCC history to have double golded with a 100% submission rate as well as being ADCC weight, absolute and superfight champion. Andre Galvao is an ADCC 6x title and 4x superfight winner, Galvao’s 6-titles and 4-superfight wins are both ADCC records. He hasn’t lost an ADCC match in 12 years; 2009 being the most recent.

“ADCC Hall of Fame: Andre Galvao, the GOAT of ADCC. Galvao has won more titles than any other competitor in ADCC’s 23 year history, 6 titles. He is also the only person in ADCC to have won more than 2 ADCC superfights, he holds the record with 4 superfight wins. Galvao hasn’t lost in ADCC since 2009.”

In 2011, Andre Galvao joined the ranks of double champions by defeating eight of the world’s best grapplers in both the 88kg division and the absolute division.

Galvao challenged fellow double champion Braulio Estima for the superfight championship at the following edition in 2013 and he submitted him with an RNC. He returned in 2015 to defend the superfight title against Roberto ‘Cyborg’ Abreu before breaking the record for superfight wins in 2017 by beating Claudio Calasans too. He took his number of superfight wins to four in 2019 when he managed to defeat Felipe Pena on points, but will he make it five in 2022?

It has been announced that Galvao will return to ADCC 2022 for a hotly anticipated super fight against Gordon Ryan. Galvao will also be training to make a return to the cage as well, having recently signed a multi-fight deal to make his MMA comeback for ONE FC.