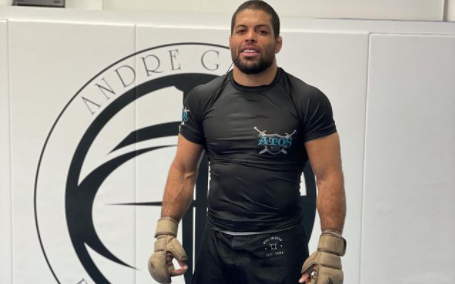 Andre Galvao appears to be planning a return to MMA. On Tuesday, the legendary grappler announced on Instagram that he has signed a multi-fight deal with an MMA promotion. Galvao previously competed in MMA from 2008 to 2010, racking up a 5-2 professional record. He has not competed since a 2010 knockout loss to former UFC champion Tyron Woodley.

Notably, Galvao didn’t divulge which promotion with which he has signed. However, earlier this year, Galvao shared that he had been approached by ONE Championship about a potential grappling match with rival Gordon Ryan. ONE Championship has shown an interest in signing top jiu-jitsu players: Ryan has signed with ONE for grappling and potentially MMA, Garry Tonon has fought his entire MMA career with ONE, and Marcus “Buchecha” Almeida recently made his MMA debut with ONE.

In short, ONE Championship seems like a realistic fit for Galvao.

Andre Galvao is one of the most accomplished jiu-jitsu competitors of all time. He is an ADCC weight and absolute champion and a four-time ADCC superfight champion. In the gi, Galvao is a five-time IBJJF world champion. He holds notable grappling wins over Felipe Pena, Romulo Barral, Braulio Estima, and many more.

After initially hinting with retirement after his 2019 ADCC superfight win over Pena, Galvao recently announced his plans to defend his superfight title at the 2022 ADCC championships where he is expected to face Gordon Ryan.