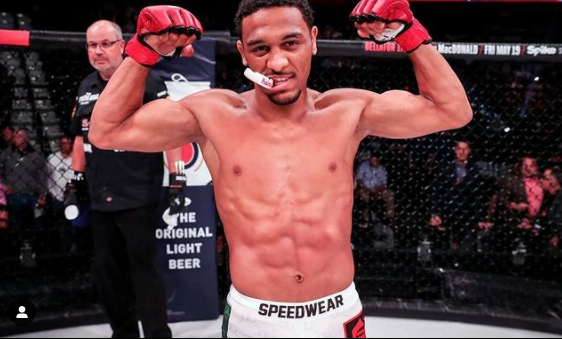 High Rollerz 10 takes place on Saturday, December 11, and will feature a 160-pound grand prix with $10,000 on the line. On Wednesday, the 420-friendly grappling promotion announced that undefeated Bellator MMA featherweight champion AJ McKee will compete in that grand prix alongside a number of high-level grapplers.

With an unblemished 18-0 professional record, including 13 finishes, all of which took place in Bellator, AJ McKee is one of the best pound-for-pound fighters on the planet, and one of its most exciting. McKee worked his way through the Bellator featherweight grand prix to win the title in July 2021 with a first-round technical submission over then-champion Patricio “Pit Bull” Freire. McKee has not competed since that win.

Although McKee has no formal background in BJJ, he has shown world-class submission skills in MMA. Seven of his 18 wins have come by way of submission, including his 2020 Submission of the Year neck crank over former Bellator champion Darrion Caldwell, as well as McKee’s title-winning guillotine on Freire.

High Rollerz is a proudly cannabis-friendly grappling and BJJ promotions. Competitors are encouraged to smoke on the mat before and after matches, and winners typically receive bags of marijuana as a prize.

How to watch: High Rollerz 10 will take place on Saturday, December 11 and will air live on the High Rollerz YouTube channel.