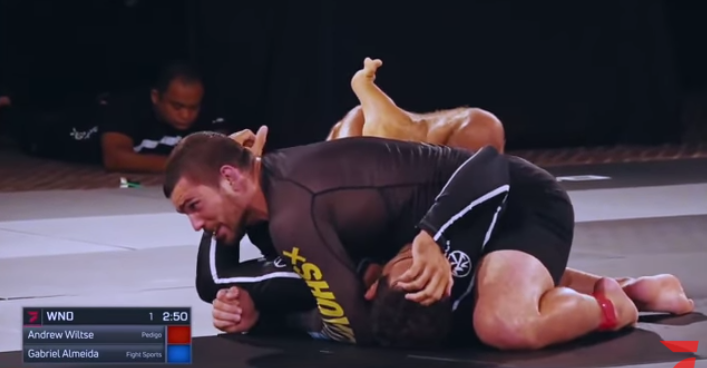 Andrew Wiltse is now halfway through a true breakout year. So far in 2021, the Pedigo Submission Fighting (AKA Daisy Fresh) black belt is undefeated in Who’s Number One competition with wins over PJ Barch, David Garmo, and, most recently, Gabriel Almeida. Wiltse’s win over Almeida was particularly special, as it was a come-from-behind victory that saw him securing a late submission. Re-live the drama of that match with FloGrappling’s “Beyond the Match” video below.

Through the first ten minutes of the match, Gabriel Almeida — a top Checkmat representative — was able to defend takedowns and control the match from top position. The match was close and competitive, but the judges agreed: Almeida was ahead.

With less than five minutes remaining, knowing he was behind on the scorecards, Wiltse was able to put himself in top position for the first time in the match. From there, he wasted no time, hitting his trademark knee slice pass to side control before moving to mount. Once in the mount, Almeida committed to escaping, which gave Wiltse the back. Wiltse then showed why he is one of the best finishers from the back in the sport, as he trapped one of Almeida’s arms and sunk in a beautiful one-armed rear-naked choke.

The top competitor out of Daisy Fresh, Andrew Wiltse was a 2020 no-gi Pans champion in what was his first major tournament as a black belt. He is scheduled to face Roberto Jimenez next month at The Road to ADCC.