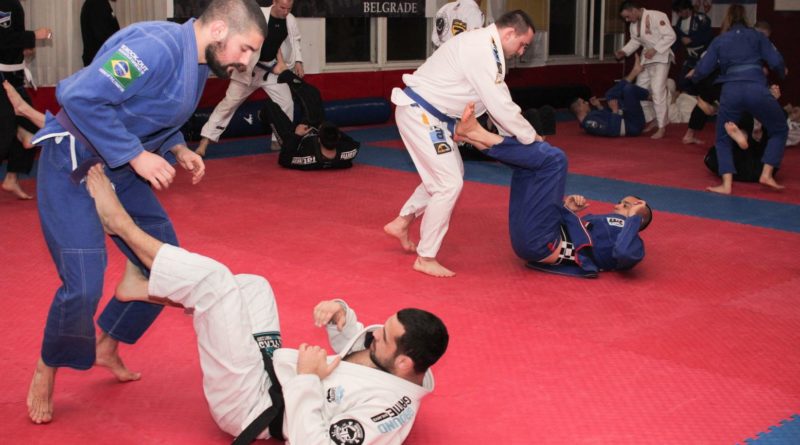 In any art, whether ballet, cooking, drawing/painting, carving, BJJ or any martial arts (just to name a few), proof of knowledge of the basics, and the learning of fundamentals is paramount before a student can be considered for entry into deeper levels of the art. This is different than a skill, in which there are basically just different things to learn how to do. Skills are things like running, weight lifting, reading, or kayaking. This is in fact the difference between art and skill; art is something that you can never stop improving on and learning about, skill just means the ability to do something well.

Of course in this article we will be discussing Jiu-Jitsu or BJJ, but the idea of “basics” and “fundamentals” is somewhat nebulous in our art. If you were to ask 5 teachers what the basics were, you’d probably get 5 different answers. Some teachers stress skills initiated from standing. Some stress beginners learn on the back in a supine position. Some demand a (limited) knowledge of striking and put primary emphasis on learning to defend yourself from an attacker in a realistic self defense scenario. But in this, Jiu-Jitsu is unique.

If you were to go to a Kendo class or a Judo class in Osaka, the same basics would be taught and the same level of proficiency demanded of you in regard to your rank as a Judo or Kendo class in London. Or, if you were to attend boxing classes in New York, or wrestling classes in Oklahoma, again, the same basics and fundamentals would be stressed as a boxing or wrestling class in Mexico City or Iran respectively. Minor details may be stressed more than others, but in effect it would all be the same principles.

In Judo and Kendo, roughly 65-85% of the class is spent drilling. Students must show a fundamental understanding and ability to perform basic footwork and movement drills before they are even allowed to spar. This means that when students finally do begin their sparring, they come in with a basic skill set. They are not good, to be sure, but they are aware of the goals and targets to look for. Repetition of certain movements have helped them to achieve albeit a low, but none the less basic level of muscle memory, allowing the student to look for openings. They have a basic game plan, and can then apply those techniques in a somewhat physically correct manner that senior students and the instructors can critique and build on as the student continues to spar. But why don’t all BJJ schools teach beginners the same fundamentals?

The main reason of course, is all Judo and Kendo dojos are part of a respective federation, the All Japan Judo or Kendo Federation. In order to rank, and compete, students pay dues not only to the school, but also a yearly due to the federation. This ensures that all students are taught the same thing at various schools around the world. Whether or not this is the best method though can also be debated, as decisions that the governing body makes are final, regardless of legitimate dissenting opinion.

Something to consider as well is, what specific techniques someone regards as basics arent as important as the goal they are trying to achieve and the fact that they drill those basics regularly. Case in point, go to a 10th planet academy, and then go to a Relson or Rickson Gracie affiliate school. A unique phenomenon is occurring in jujitsu now, as things are basically starting to split along two distinct lines; sport Jiu-Jitsu and self defense Jiu-Jitsu. The fundamentals one will drill and study in a self defense school are going to be different than a school which is set up around sport BJJ, especially one that is a no gi gym. And both of these types of schools, will vary still from what is taught in an MMA gym as grappling basics.

We’ve all rolled with that new student who has that crispy new gi and blindingly white belt. Its either open mat or the post technique phase of class and people begin to pair off and roll. You bump fists and they…….stare at you. You grab their lapel, or grab their wrist or whatever the case may be, and they…….continue staring. A conversation then usually begins on who the student is, their background, and then the newer student is shown what their goal should be in the roll and maybe one or two things they can try and go for.

The author does not find this aspect of the way the art is taught to be the most practical and effective. Drills are rarely done in most schools, with sparring being the primary exercise and main method of transmission of knowledge in our art. As said, some schools do drill, but not anywhere near as much as a Judo or Kendo class does. Something that has consistently been shown to be an extremely effective way to ingrain specific movements and principles into the minds of newer students, is to have classes centered around drilling and situational rolling, with time set aside for free rolling and randori after this technical phase of class. The reason is obvious.

This possibly is one of the reasons for the high turnover rate in BJJ, since often when people communicate their frustrations, they are told “this is how it is in the beginning”, or “yeah, it takes a long time to get good. You just have to stick with it”. Neither of those statements are wrong, but with out proper time spent on developing the muscle memory required for technique, the road will be longer, bumpier, and much more annoying to new students. What do you think? Should BJJ schools incorporate more drilling?

This article is part of a series on BJJ Fundamentals and to see the rest of the series, click here.