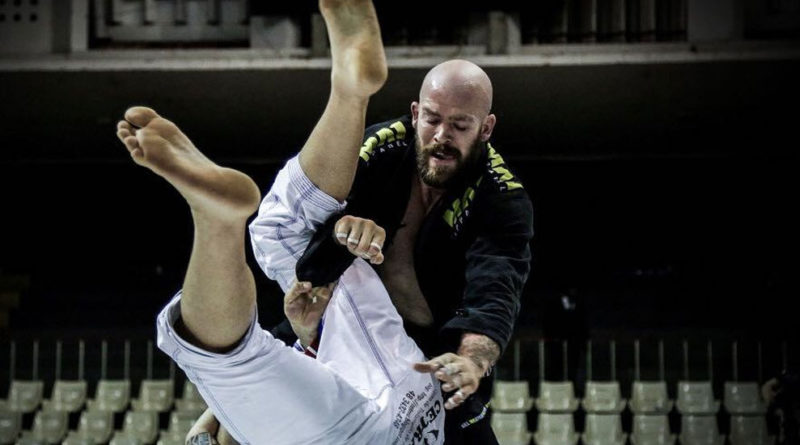 This article is the latest in a series on BJJ Fundamentals, delving into the standing game. For the rest of the series, click here.

*in this discussion “wrestling” is an umbrella term for all styles such folkstyle or Greco-Roman etc.

The latest in our multi-sectional study on BJJ fundamentals is something which is often neglected as of late; the stand up game. The purpose of these instructionals is to be able to give the newer student, or the more experienced student looking to broaden their horizons, some options to begin their study of the various methods. Many newer practitioners are either intimidated by attempting a throw or a takedown either because of fear of injury in the attempt, or because the energy involved is too great and they have a subconscious realization their attempt will be stuffed or otherwise stopped and then they will be on bottom defending against an opponent who is in a more advantageous position. These people usually decide that pulling guard, or going to a seated position and scooting across the smooth mat like a dog with worms is a better approach. That is not grappling. Unless a serious injury or other health issue prevents it, standing technique should not be neglected and should be studied as diligently as any other area of BJJ fundamentals. You are not a complete grappler if you have not studied how to take an opponent down, or likewise defend their attempt to take you down. This cannot be disputed.

In grappling, to take another person to the ground, there are several methods; throws, trips, sweeps and takedowns. All these can be grouped, arguably more or less anymore, under the two distinct styles of Judo or wrestling*. For obvious reasons in this article we will not be discussing using strikes to knock another person down. For simplicity, we will look at 2 basic judo, and 2 basic wrestling moves which you can easily begin to apply in sparring. Lets start by analyzing the style BJJ originally came from, [Kodokan] Judo. The technical repertoire of Judo is vast, and an attempt to explain all aspects, all techniques and all approaches would fill literal volumes. But there are basic movements which we can look at to start developing a game based upon it.

As stated, there are many Judo techniques, and throws take up a large piece of the pie. Lets start with O soto gari.

O soto gari is a very good throw to begin your Judo training with. It contains many of the basics that you’ll need as you improve in your Judo studies. Basics such as, but not limited to, body to body contact, balance breaking (kuzushi), along with using the natural reaction of a persons back step and defensive pulling momentum against them. This technique is often presented from the clinch, or with an underhook on one side and wrist control on the other.

Another common throw seen in Judo and which is frequently open when the opponent is driving in, is Harai Goshi. A common set up is from the whizzer, however it is applicable also from the under hook.

Harai Goshi is a very effective turning throw against an opponent who is intent on moving forward. Be cognizant of the hip to hip connection when doing Harai Goshi. This will reduce the chance of knee injury.

These are two examples of basic judo throws. Some instructors would, of course, have others they would prefer to teach to a beginner. The point is not for these to be the definitive options for beginners, but to present some options that are applicable from gi, and no gi.

To take a look at more from our Judo collection, click here.

If throws and standing sweeps are not your thing then don’t worry, there’s still other options. Namely, takedowns. Acknowledged pretty much universally as one of if not the best skill sets to have in modern MMA, wrestling employs a variety of ways to trap the legs or upper body and either drive into or drag the opponent down. Physical strength is as important as technique in wrestling, and anyone who has been on the receiving end of a skilled wrestlers aggression can attest to the physical power, endurance and mental toughness they demonstrate.

The two basic takedowns we’ll look at are the single, and double leg:

Wrestling is a fantastic art and especially from the clinch offers a variety of options. These two takedowns are the backbone of any wrestling based game, are effective in the gi and without, and can be used in tandem. One of the great things about wrestling is that since it is primarily practiced without the gi, once a practitioner is versed in a handful of the techniques, they can wrestle with any grappler from any wrestling style in the world and once the ruleset is understood, hold their own.

Hopefully these moves have given you a starting point and some fundamentals from which to base your standing game for BJJ. There’s many other options, and different body types or personalities will favor different moves. But regardless of the techniques you choose to gain a deeper knowledge of, it is important that they be transferable between gi and no gi. It’s also important to remember that the methods of off balancing, elevating the opponents hips in order to execute a throw or a sweep, are incredibly intricate and require time to learn.

To take a look at more from our Wrestling collection, click here.