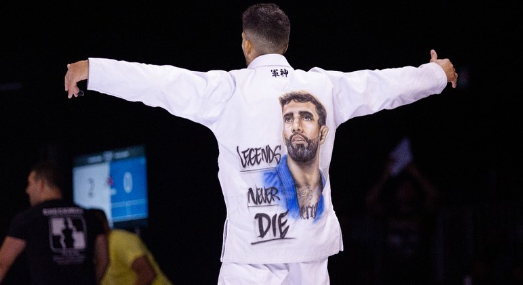 Gabriel started strong with a dominant win over Wallison Oliveira, showing off a clean knee cut pass directly into an armbar as he secured an armbar with just over a minute remaining in the match.

In the second round, Gabriel won a tit-for-tat battle of sweeps against Israel Almeida, staving off a last-second back-take attempt to win on points, 4-2.

The final saw Gabriel square off with 2022 IBJJF light-feather world champion Meyram Maquine Alves. The Checkmat athlete again displayed excellent tactical and strategic awareness, earning an early sweep that would carry him to a 2-0 points victory.

And in the final no-gi superfight of the evening, Isaque Bahiense earned an upset win over ADCC silver medalist Mica Galvao on the strength of one penalty given against Galvao for a last-second guard pull. For the first time in his black belt career, the 18-year old Galvao is riding a two-match losing streak (he lost to Kade Ruotolo in the final of the ADCC World Championships).

Lower on the card, Dream Art’s Anna Rodrigues continued her run of dominance at a higher weight class, securing an armbar win over Maria Claudia. Fresh off a gold medal performance at the no-gi Pans, Rodrigues will compete next week in the IBJJF Lightweight Grand Prix.