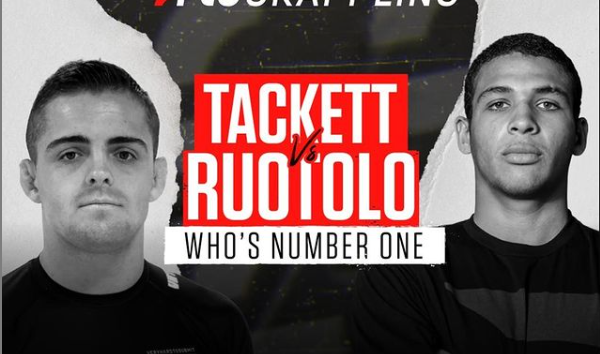 This Friday’s Who’s Number One event has lost its main event, FloGrappling has reported. Craig Jones has pulled out of his scheduled main event match with Tye Ruotolo, citing health concerns. Replacing Jones will be William Tackett.

With Jones out, the match between Rafael Lovato Jr. and Gilbert Burns will be slotted in as the new main event.

William Tackett is just 19-years old but already considered one of the world’s best grapplers. A Brazilian Fight Factory representative, Tackett owns recent notable wins over Manuel Ribamar, John Combs, and Andrew Wiltse. He is coming off a close decision loss to Wagner Rocha at Fight to Win 171.

Tye Ruotolo is another one of the sport’s young phenoms. An 18-year old Atos representative, Ruotolo is an ADCC veteran and holds wins over Nicky Ryan, Renato Canuto, and Vagner Rocha, among others. In his last appearance at Who’s Number One, he defeated Tackett’s teammate Kody Steele by heel hook.

This is an intriguing match-up between two of the sport’s most promising young competitors. Although Tackett will have a size advantage, look for him to play from bottom, trying to create leg entanglements while Ruotolo uses a high-movement, high-aggression style of passing that leads to D’arce choke opportunities.

How to watch: Who’s Number One takes place on April 30 and will air live and exclusively on FloGrappling.

Ben Coate has 603 posts and counting. See all posts by Ben Coate