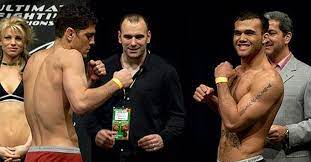 One of the most hotly anticipated returns to the cage now feels one step closer to a reality. On Wednesday, TSN’s Aaron Bronsteter reported that, per UFC president Dana White, the UFC is targeting a rematch between Nick Diaz and Robbie Lawler for a co-main event slot in September.

The two first fought in 2004 at UFC 47 in what was one of the best fights of the year. In that bout, an 18-year old Diaz knocked out a 22-year old Lawler in spectacular fashion. Both men would go on to huge accomplishments in MMA, with Diaz winning the Strikeforce welterweight championship and becoming one of the most beloved fighters in the history of MMA. Lawler would capture the UFC title in 2014 and successfully defended that title twice in two of the best UFC championship fights of all time.

Rumors about a Nick Diaz return to competition have been swirling for years. He last competed in 2015 when he lost a decision (that was subsequently ruled a no contest) to Anderson Silva. Prior to that, Diaz dropped a decision against then-champion Georges St-Pierre.

Robbie Lawler is coming off a decision loss to Neil Magny in August 2020. Prior to that, the former champion struggled to find success, losing three straight.