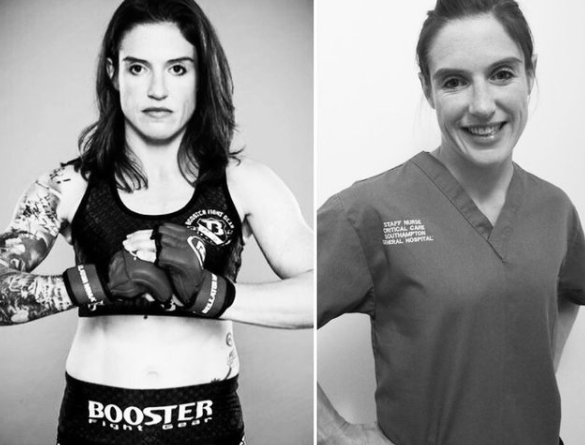 Bryony Tyrell is a pro MMA fighter and purple belt BJJ competitor from New Generation Martial Arts, Southampton, England. Bryony has been entertaining martial arts since she was 19; starting off her MMA path by doing kickboxing and kung fu for 12 years, as well as Japanese Jiu Jitsu and Krav Maga; like many MMA fighters, Bryony turned to Brazilian Jiu-Jitsu to help improve her groundwork in the cage.

Alongside fighting, Tyrell is also a mother and a nurse so finding time to train is a task in itself; however if you want to find time, you will. Due to working Mon-Fri (Tuesdays off), Bryony has to fit in her MMA training in the evenings, weekends and wherever she can, and as it is something she loves, she will always find the time to train.

Tyrell is in her 40s and has been given some great opportunities in the past few years, but they don’t come without her own doubts, speaking about her time fighting on Bellator, Tyrell says, “I was retired for a year (MMA) and was a bit demoralized because people have been saying ‘you’re too old’, people look at your age and just think you’re done, even though I’ve done very well, so I just feel a bit demoralized sometimes.” However when speaking of her opportunity to fight on Bellator she expands, “I was going to fight Denise on a week’s notice, but I couldn’t because I had a medical suspension from the TKO I had on Cage Warriors: I couldn’t fight. I then saw she was fighting in London and they didn’t have an opponent for her so I spoke to my manager and said I would love to do this fight because I agreed to do it a year ago, so give me this chance! Fighting on Bellator or UFC is the pinnacle of MMA. And yeah, they gave it to me.” If you want something there’s no harm in asking for it, Tyrell continues, “To be honest I think all of the big opportunities I have had – I’ve asked for. Cage Warriors, Bellator, Polaris I’ve asked for: they can only say no.”

Alongside Pro MMA, Tyrell was also given a chance to fight on Polaris Squads in the ‘new blood’ cards, Tyrell says, “I loved it. Again, a really amazing opportunity. Amazing experience to be up there with the top level grapplers; like grappling royalty. Also to be an MMA fighter offered that opportunity, was really amazing.” Bryony unfortunately lost to a submission from Libby Genge, but is there anything she would have changed if she could? Tyrell continues, “I would have liked to fight from standing because I think that’s what I am better at. She sat down which is a completely understandable strategy, I just love wrestling so it sort of took out that part of my game. I expected that looking at her strategy though. Passing guard is not my strategy; but other than that – not really.”

Bryony’s next BJJ comp will be the 24/7 Brighton Open this Sunday, 29 August, and will be facing Olympic Judo player Sophie Cox, Bryony jokingly says, “I’m pretty sure she will be standing. Where she is a Judoka, as soon as she gets a hold of me I’ll probably get thrown on my head, but I’m looking forward to it.” She may be a Judoka but Tyrell is pro MMA with her forte being in back takes and wrestling and her favourite sub being the RNC, so it sounds like a good match up. Two completely different fighting styles.

Having trained and competed BJJ for eight years, Bryony has had some incredible opportunities when it comes to opponents and she actually fought leading European female BJJ black belt, Ffion Davies around five years ago, when they were both blue belts. As of now, there is two competitors Tyrell would be interested in grappling again; Kate Bacik and Kate Jackson. Speaking of Bacik, Tyrell says, “I love her, she’s a great competitor, really active, and she’s strong too, so it’s always going to be a good fight with her.” When speaking of Jackson Tyrell says, “I always get beaten by Kate, so maybe, eventually, I can beat her.”

Regardless of being 41, Tyrell aims to have her black belt before she is 50 and there’s a fair few competition goals she wants to hit too; “I would love to do ADCC the UK one, I really enjoyed that because the ruleset really suits my style a bit more than the IBJJF because it favours wrestling a bit more. I would like to do the No-Gi European championships IBJJF, and if I can afford it – go out to the IBJJF No-Gi World Championships again.”

Having spent over half her life doing martial arts, Tyrell’s tips to newbies are: “I think as a competitor, and starting jiu jitsu, you have to learn to be able to lose. You have to accept losses and learn from them, rather than dwelling on them. When you start jiu jitsu you’ll probably get submitted for around six months until you start to get to grips with it. I think you have to persevere with jiu jitsu, probably a lot more than striking because with jiu jitsu you won’t have a clue what’s going on for months but suddenly it will just click and you will start to get a flow of it. With competing again, to get better you just lose and lose and eventually you will start winning. That is my advice. Persevere and stick with it.”