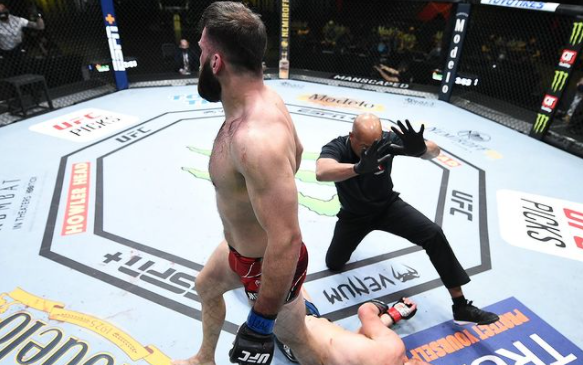 The submission finishes at UFC Vegas 23 just keep on coming. In the second round of his middleweight fight with veteran Sam Alvey, Julian Marquez hurt Alvey with strikes before securing a no-hooks rear-naked choke that put Alvey all the way out.

Watch cageside video of the brutal finish below.

With the win, Julian Marquez extends his win streak to two. In February, he returned from a two-year lay-off to earn a comeback submission victory against Maki Pitolo. Marquez is now 3-1 in the UFC since joining the promotion in late 2017.

A veteran of nearly 50 professional fights, Sam Alvey is now win-less in his past six fights. He went to a split draw with Da Un Jung in his last outing, prompting Alvey’s return to the middleweight division.

UFC Vegas 23 took place on Saturday, April 10 and was headlined by a five-round middleweight fight between Kevin Holland and Marvin Vettori.