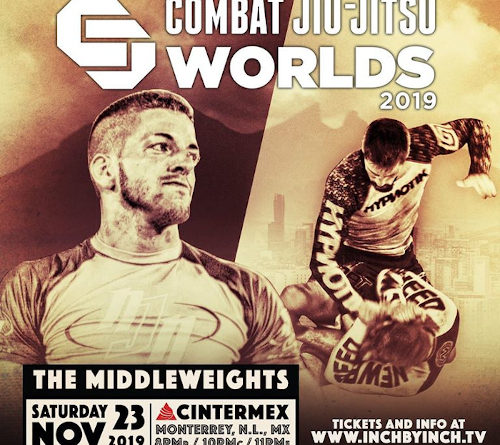 Combat Jiu Jitsu worlds ended up being every bit as exciting as we’d expected. The event had a number of mismatches, lightning fast submissions, and victories in overtime. What sets CJJ apart from any other ruleset is the potential for some fights to be stopped via TKO and we saw a great example of that too. All in all, the tournament was just as much of a success as previous editions and there were quite a few fun matches well worth watching.

Felipe Fogolin vs Alejandro Baez
Fogolin pulls single leg X guard and immediately reaps into an outside heelhook to get the tap in under 16 seconds.

Nisar Loynab vs Sloan Clymer
Clymer is defensive on top for most of regulation. In overtime, Loynab gets an armbar from spiderweb in the third to take the win.

Kyle Chambers vs Michael Esquivel
Chambers with the constant leglock threat. He pulls butterfly guard and gets to outside ashi fast, Esquivel escapes and both stand. Chambers exposes his back, shucks Esquivel off, and sits back for a leglock. Esquivel defends and gets on top half guard, but Chambers reverses with a heelhook attempt. Esquivel plays De La Riva guard from the bottom. Chambers sits back again and gets the inside heelhook from a modified 50/50.

Dan Martinez vs Hiram Kurukawa
Martinez with a flying triangle attempt that misses. He recovers quickly and gets under Kurukawa, reaping the leg for a tight outside heelhook in 29 seconds.

Nick Greene vs Javier Torres
Torres uses a size advantage to bully Greene on the feet and the floor. Spending most of his time on top, he shows good ground and pound, but time runs out. In overtime, Torres chooses the spiderweb and gets the tap incredibly fast.

Jesse Taylor vs Justin Renick
Taylor gets a single leg takedown fast. Renick gets to closed guard and starts attacking constantly, showing good guard retention. Taylor tries to strike, a few passing attempts. There are some nice scrambles. Taylor eventually passes and goes to north south to stabilize. He gets mount, then gift wrap to take the back and get the choke.

Matt Secor vs Salvador Izar
Secor with front headlock to duck under to takedown. Izar recovers closed guard. Secor applies heavy pressure to pass. Izar tries to get off his back but Secor is not letting him move. Secor gets to mount with an arm triangle grip. Izar taps, but the ref confuses it for palm strikes. Secor chokes Izar unconscious and the match is quickly stopped.

Nisar Loynab vs Felipe Fogolin
Both men handfighting aggressively. They are “got down” after a minute with no takedown. Fogolin chooses top. Loynab gets to closed guard, Fogolin stands. Loynab attempts a leglock, gets a sweep. Fogolin counters with a kneebar. Doesn’t have it immediately, but controls the position well. The knee is turned but Fogolin has Loynab’s legs crossed. After some adjustment, Fogolin eventually gets the tap.

Kyle Chambers vs Kaniela Kahuanui
Chambers pulls open guard and ends up in half guard. Kahuanui attempts an Estima lock but Chambers twists out of it. Back to half. Chambers uses strikes to make Kahuanui posture up, creating space to spin under for a lecklock. Chambers gets to outside ashi finishes with an outside heelhook.

Javier Torres vs Dan Martinez
There is another get down after the first minute and Martinez chooses the top. Gets to his feet to break the bodylock. He passes to half guard with an underhook. Now he passes half guard too. Torres tries to reguard and catches Martinez’s foot. Martinez takes the back off of it and finishes with a rear naked choke.

Matt Secor vs Jesse Taylor
Secor controls most of the match with heavy top pressure and back takes. He cannot find the finish in regulation, though, and Jesse Taylor gets the choke in the third to win by overtime submission.

Felipe Fogolin vs Kyle Chambers
Chambers pulls guard and looks for outside ashi. Fogolin sits back for a leglock, but Chambers aggressively counters with his own inside heelhook.

Dan Martinez vs Jesse Taylor
Martinez sits down for open guard. Gets half guard, uses a butterfly hook flip Taylor over and into a quick heelhook.

Dan Martinez vs Kyle Chambers
Chambers pulls guard repeatedly throughout regulation to try get in on a leglock. Martinez is wise to it, defending and making some attempts to pass. He has no success, but does take the back from standing briefly. Chambers escapes and time runs out.
Overtime: In the first, Martinez gets max ride time from the back. Chambers picks spiderweb, but Martinez gets on top and stacks, eventually getting his arm out. In the second Martinez again rides the back effectively and escapes Chambers’ back control. After a third extended ride on the back by Martinez, Chambers needs a finish. He picks spiderweb, but Martinez escapes again.

Four superfights were on the card as well, and they more than delivered. Each athlete came with super high energy and aggression, perhaps knowing that they had no need to conserve their strength for another fight. Three out of four matches finished in regulation, and each of these were very interesting fights for wildly different reasons.

Micah Brakefield vs Abraham Canevati
Puree domination for Brakefield. He gets the back fast and attempts a twister. Canevati scrambles back to guard, but Brakefield gets to half and locks a kimura. Canevati tries to turn to escape, but Brakefield takes the back and turns the kimura into a hammerlock to get the tap.

Pearl Gonzales vs Lilian Borja
Gonzales comes out aggressively and gets a quick takedown. Ends up in closed guard, but slides her knee in and starts ground and pounding. Uses it to pass. Slaps from side control give her a d’arce opportunity, which gives her mount. Armbar attempt, but she gets reguarded. Gonzales quickly gets the underhook and passes with a kneecut. Grabs the d’arce again, but Borjas does not want to tap. Gonzales transitions to a triangle, takes a triangle armbar, and is eventually forced to break her arm in brutal fashion.

Ricardo Arreola vs Ivan Perez
Both men very energetic with aggressive wrestling. Neither gets the finish after a dynamic regulation period, and Ricardo Arreola wins by fastest escape time in overtime.

Nino Marroquin vs Tito Castro
Get down: Castro on bottom. Marroquin breaks the bodylock quickly and gets to half. Attempts to pass, but gets reguarded. Marroquin with solid strikes from the top, opens the guard again and gets to half. He make some attempts to clear the knee, but is mostly looking to pressure and strike the body and head. Castro eventually turns into his opponent to defend and Marroquin gets wrist control around his back, opening up with strikes. He bloodies Castro’s face to get the TKO stoppage and show us exactly what Combat Jiu Jitsu is all about.