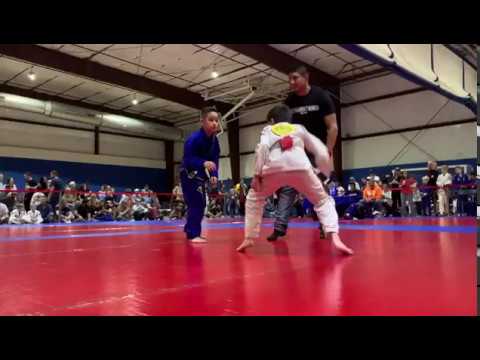 In light of some recent less-than-positive news coming from Russian BJJ tournaments, we thought it would be appropriate to balance that out with a great example of BJJ sportsmanship instead. Just the other day at Battleground Grappling Championship in Texas, a young competitor by the name of Collin showed the best side of this sport. He was matched up with another young boy with Autism and decided to put up a good fight and give him a solid match, before eventually letting him win.

According to the parents involved, the sportsmanship that the young BJJ athlete displayed was entirely of his own choice. That just makes this all the better to hear, with the full quote from Anakin’s father below:

“I just wanted to share my gratitude for the empathy and humility your students showed my son. My son (Anakin) has Autism Spectrum Disorder (ASD) High Functioning. Our Professor reached out to the Battle Grounds Tournament team and they found a fight for my son. This young man graciously allowed my son to “win” the match by making him feel like he was really fighting to win.“

“I had no idea this was happening until I watched their match. I realized that this young man, Collin Tingley, was allowing Anakin to win. I just assumed that Anakin was gonna have to fight and learn that you can’t always win. Later after speaking with Collin’s mother, I learned that she had a talk with him about his plan to fight my son. She said he wanted to make him work a little bit, then he was gonna tap out and let Anakin win.“

“I was a mess afterwards, I was so caught up with emotions. This is why I love BJJ. Even though we are on different teams, we love and look out for each other. What an amazing family you have at your Dojo. Revolution Dojo has an amazing team and obviously some amazing coaches. Again, I can not thank you enough for making my son feel special. God bless you all.“