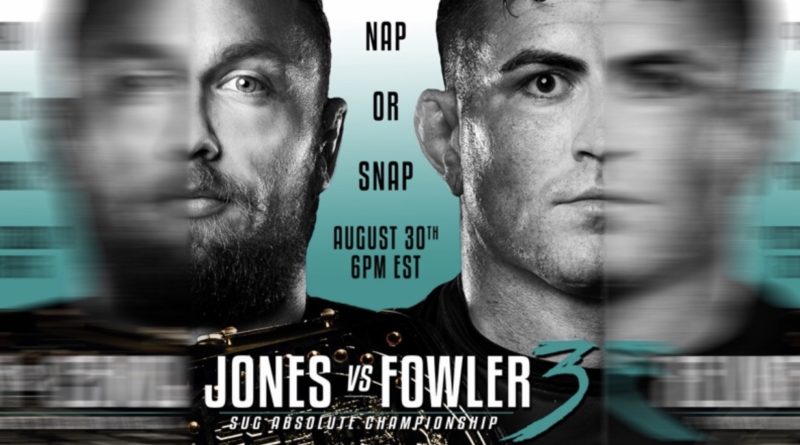 After the controversial end to the Craig Jones vs Mason Fowler bout at SUG 16 fans were clamoring for a redo. Never one to let a golden promotional opportunity go to waste Chael Sonnen has decided to give the fans what they want on August 20th at SUG 17.

Jones and Fowler first fought at ADCC 2019. After a hard fought battle Jones submitted Fowler with a guillotine choke when Fowler exposed his neck as he attempted a single leg. Undaunted Mason Fowler faced off against Craig Jones at SUG 16 with a modified strategy. Rather than aggressively taking the fight to Jones Fowler decided to disengage until overtime. Though some pundits might suggest this strategy is boring it worked. In overtime Fowler managed to sink in a rear naked choke over Jones’ face. Though Jones never tapped he did let out an audible grunt which the referee interpreted as a verbal tap. This questionable turn of events left Jones incredulous and Fowler unsatisfied. Ever the gracious competitor Fowler addressed the fans concerns by saying, “Although I am leaving Portland with the belt, the win is not satisfying, and I feel the fans deserve more. Craig was kind enough to offer me another shot after our first match and I will do the same.” Well played Mason, well played.

Though it is doubtful Chael will change his rule set social media is ablaze with suggestions. Should Jones vs Fowler 3 be submission only? Should the regulation time be extended to ten or even twenty minutes to give the competitors a bit more time to work. Should the rules be reformulated to penalize competitors who don’t engage during regulation? Either way on August 30 hunker down and prepare the popcorn because this trilogy bout is going to be fire.