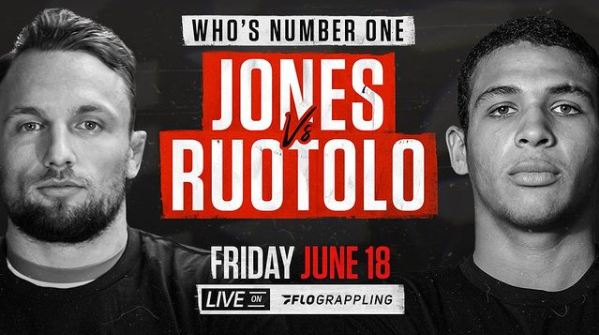 Craig Jones has a busy month ahead of him. On Friday, May 28, he’ll take on Luiz Panza in the main event of Who’s Number One (WNO). Just three weeks later, on June 18, he will face a previously-booked opponent, Tye Ruotolo, at WNO. FloGrappling announced the match.

The pair had been scheduled to square off in the main event of the April 30 WNO, but Jones was forced to withdraw days before the event due to health concerns. Ruotolo instead faced William Tackett, earning a dominant decision victory.

Craig Jones has been one of the premier no-gi grapplers in the world for the past few years. The Danaher Death Squad representative is an ADCC silver medalist with recent notable wins over Vagner Rocha, Roberto Jimenez, and his lone opponent in 2021, Ronaldo Junior.

Tye Ruotolo is just 18-years old but already one of the top competitors in all of jiu-jitsu. He trains under Andre Galvao at Atos, and in addition to his recent impressive performance against Tackett, Ruotolo owns wins over DDS team members Nicky Ryan and Oliver Taza.

How to watch: WNO takes place on May 28 and will air live on FloGrappling (subscription required).