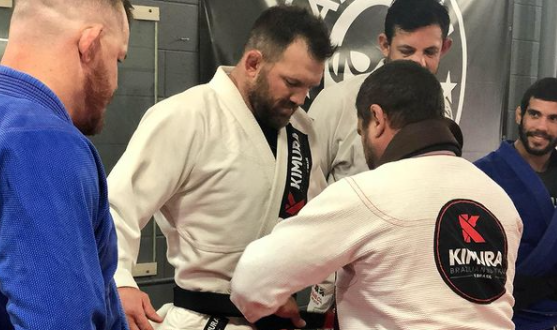 After 15 years I have received my black belt from @jairlourencokimura ! What an honor to receive it from a highly decorated black belt and most importantly a great person and team. 👊🏼 also a ton of help from my man @triboletbeau
•

Bader was given his black belt alongside training partner and fellow UFC veteran CB Dollaway.

In 2008, Bader won The Ultimate Fighter Season 8, defeating BJJ standout Vinny Magalhaes by first-round knockout in the finals. Over the course of the next xx years, Bader racked up 14 more wins over the course of his career, consistently finding himself among the elite of the light heavyweight division with wins over Quinton “Rampage” Jackson, Rashad Evans, and Antonio Rogerio Nogueira. In 2017, Bader signed with Bellator MMA, winning the light heavyweight championship from Phil Davis in his promotional debut. He would lose that title in 2020 to current champion Vadim Nemkov.

A Division 1 collegiate wrestler and three-time Pac 10 champion for Arizona State University, Bader has shown off dominant wrestling throughout his career. And although he owns just a pair of submission victories over his 34-fight career, Bader has displayed expert top control, pressure, and understanding of positional jiu-jitsu throughout.

Congratulations to Ryan Bader on this accomplishment!