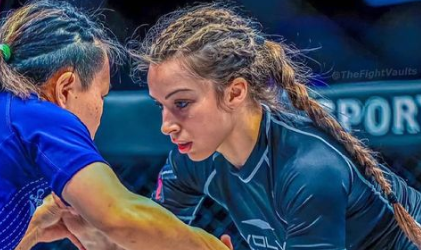 Top BJJ competitors Danielle Kelly and Bianca Basilio have been booked for submission grappling matches at ONE 163 and ONE on Prime Video 4, respectively.

Singapore-based martial arts promotion ONE Championship continues to grow its submission grappling divisions and has recently booked a pair of elite athletes in upcoming events.

On November 18 at ONE on Prime Video 4, Danielle Kelly will take on Sambo world champion Mariia Molchanova. The next day at ONE 163, ADCC and Brasileiro champion Bianca Basilio will square off with Milena Kaori. Both events will take place at Singapore Indoor Stadium.

A black belt under Karel Pravec, Kelly is a Who’s Number One veteran with notable wins over Jessica Crane, UFC veterans Cynthia Calvillo and Roxanne Modafferi, as well as current UFC strawweight champion Carla Esparza. Kelly made her ONE Championship debut earlier this year at ONE X when she grappled MMA veteran Mei Yamaguchi to a draw.

Kelly’s opponent, Molchanova, is essentially brand new to submission grappling, but has a wealth of experience in high-level Sambo competition.

The bout represents a continuation of the jiu-jitsu-versus-sambo rivalry that ONE has been cultivating, first with Rodrigo Marello against Ruslan Bagdasarian at ONE 161, then with Kade Ruotolo versus Uali Kurzhev at ONE on Prime Video 3.

Basilio has been one of the world’s top female competitors since earning her black belt in late 2016. She holds victories over the likes of Ffion Davies, Mayssa Bastos, Michelle Nicolini, and Anna Rodrigues. Known for her powerfully effective straight footlock, the Caio Almeida black belt has elite skills in all areas of grappling.

Kaori is a Japan-based black belt with limited competition experience at the world class level. As such, she will find herself as a sizable underdog to the ultra-accomplished Basilio.