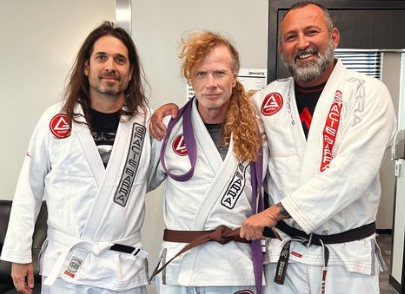 Almeida shared the good news by posting a video of him tying Mustaine’s new brown belt around his waist, and a picture of him with the rocker on Instagram which is captioned:

“Congratulations @davemustaine,” he wrote. “All of us know how hard is to stay focus and work towards our goals. But with small and steady paces we will get there ! One step closer ! #brownbelt #backstagebjj #ontheroad #bjj #graciebarra #iamgbsh #iamgbctn #megadeth #metal #guitar #music”.

“Behind every mountain is more mountains.”

Mustaine was recently fighting throat cancer, and throughout it all, has pushed through, and done some pretty incredible things this past 12 months. After announcing he was cancer-free, the 61-year-old rocker earned his purple belt, followed by his brown belt, released a new album called ‘The Sick, The Dying… And The Dead!’ and has been training alongside a tight tour schedule with headlining band Five Finger Death Punch – which is pretty remarkable!