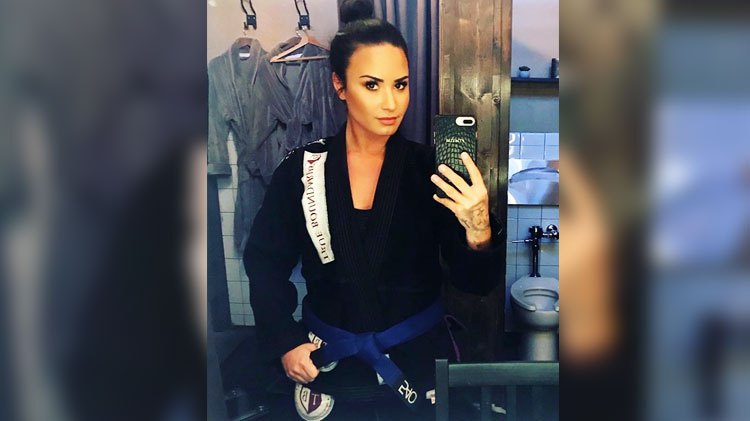 The hype of celebrities jumping on board the jiu jitsu train has increased over the past decade, and the sport is gaining more recognition now – in terms of global and celebrity – than it ever has done before. Grappling Insider also looked into 10 BJJ Celebrity Black Belts, and there’s some celeb black belts who may surprise you (Rikki Rocket from rock band Poison has been training since 1998!) In recent years we’ve seen the likes of Tom Hardy, Demi Lovato, Ashton Kutcher, and Russell Brand who have all taken to the sport, and now – like many of us – jiu jitsu has wormed its way into being a key, fundamental part of their life.

Covid has messed up training jiu jitsu and combat sports for a lot of people; whether that be because of their own health or current restrictions, and although Lovato has taken a break from the sport – she has plans to get back to training ASAP. In discussion on a recent interview with Joe Rogan the singer states, “I was super super into it until covid hit, and then when covid hit I got really nervous because I have asthma and autoimmune sh*t, so I got so nervous about training so close with anybody – that I took a break from it – but I’m anxious to get back. I can’t wait to train.”

Lovato received her blue belt in 2017, and pre-covid she used to work out six days a week, sometimes for four hours at a time. “This is her safe haven,” Jay Glazer, her trainer, and owner of L.A.’s Unbreakable Performance Center said in an interview with People. “Demi will be here for four hours a day. It’s her one place where she doesn’t have to be a pop star. She’s talked a lot about her addictions, and this has become her healthy addiction. She lights up when she comes in here.”

Having had issues with addictions in the past, Lovato comments on how it’s the best thing she’s found – outside of meditation – for herself and her wellbeing. “It’s the best thing I’ve found – outside of meditation – for me. It’s two totally different things but..” Rogan chips in and agrees with Demi, that jiu jitsu is kind of different, but isn’t actually that different to ‘meditation’. Backing up his statement, Rogan says, “Jiu jitsu people are some of the calmest people I’ve ever met in my life. They’re all chill.”

“Regular life seems easy when some b*tch is on top of you trying to collar choke you.”

Lovato finds the flow rolling aspect to be the most meditative part for her, as she rarely gets a chance to spar (like most celebs) as she needs to be able to work – and being injured can hugely jeopardise that. Lovato continues, “Especially when you get into flow rolling. Like that is meditative. That is meditation. So, yeah I love it.” Rogan adds, “I think even hard sparring is meditative because you’re forced to think only of that thing, and when you think of that thing only, it acts as like a cleansing. Also it’s so hard to do (jiu jitsu), that regular stuff seems easy. Regular life seems easy when some b*tch is on top of you trying to collar choke you.”

Flipping the visual Rogan creates, Lovato adds, “Yeah, but it’s also really empowering when you’re collar choking.” Jiu jitsu is empowering because even if it’s only for a bleak second – it makes you feel strong, assertive, and in control – which is empowering af! Rogan asks if the star remembers the first person she ever tapped out, she hesitates and realizes she can’t remember, to which he responds, “ That’s good. That probably means that you’ve tapped a bunch of people out.”

Although a hugely successful singer and actress, and clearly a committed jiu jitsu-goer Lovato humbly says, “What’s really wild is when you surpass yourself. I never thought that I’d get a blue belt. I just never thought that I would be a belt in anything. I’m a singer. Then hard work pays off, and it’s just really cool when you get to prove yourself wrong.”