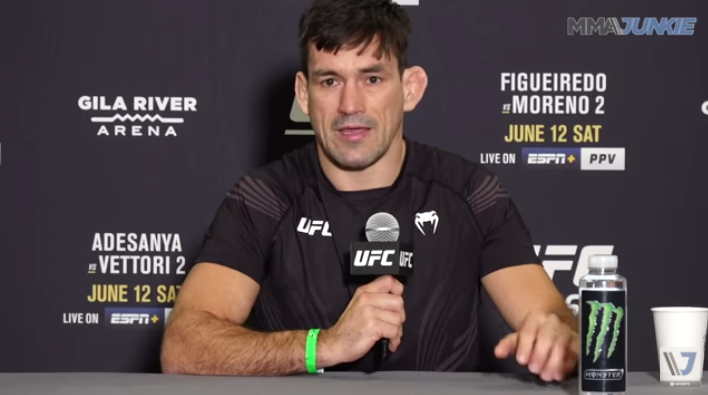 Demian Maia is widely considered the best representative of Brazilian jiu-jitsu in modern MMA. Sure, plenty of more accomplished jiu-jitsu competitors have tried MMA, but few have found as much consistent success over a sustained period of time, all while using a jiu-jitsu-focused approach to fighting. At a media day prior to his fight against Belal Muhammad at UFC 263, the aging Maia admitted that this could be the final fight of his career.

In October 2019, Maia extended a win streak to three with a submission win over Ben Askren. A few months later, though, Maia suffered a first-round knockout defeat to former title challenger Gilbert Burns. The 43-year old Maia readily admits that his career is winding down, but will UFC 263 mark his final bout?

“This will depend on Saturday,” Maia told reporters. “Of course I’m near the end and it could be the last fight. But you know what, I’ve been performing so well in training camp and I’ve been feeling so well that I could do one more, a couple more. Most likely one more… but of course it depends, because you perform as well in the training camp, and sometimes you cannot translate to the Octagon… If not, it will be the last one…”

Especially if this is the final bout of his career, Maia is happy it’s happening in front of a live audience.

I don’t want to end up my career without a crowd. It would be so, so sad, at least my opinion. And thank God events just came back to normal and are coming back slowly… that’s why I’m here. I’m very glad for that.”

If Saturday does mark the end of Maia’s career, he’ll be walking away from the sport with plenty of accomplishments and proud moments. He twice challenged for the UFC title — once at middleweight and once a welterweight. Over the course of his 14-year run in the UFC, he has amassed 11 submission wins, and even at this advanced point in his career, he is one of the most feared grapplers in all of MMA.

How to watch: UFC 263 takes place on Saturday, June 12. Demian Maia vs. Belal Muhammad will take place on the main card, which will air on ESPN+ pay-per-view.