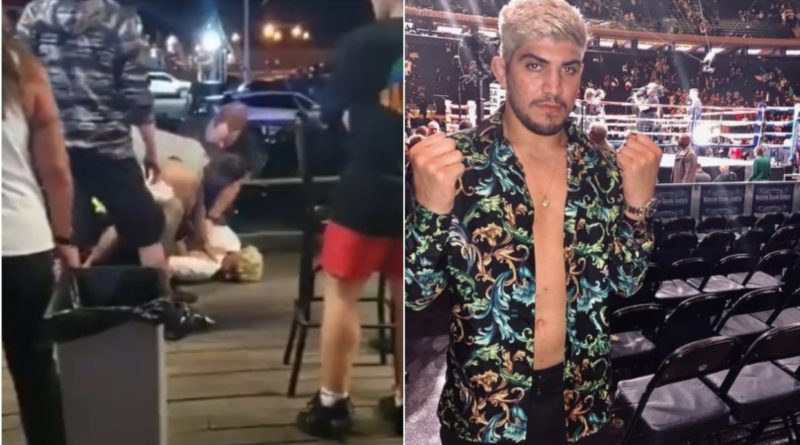 Dillon Danis has finally spoken up about the viral incident that scored a New Jersey bouncer viral recognition and some free jiu-jitsu classes with jiu-jitsu legend Tom Deblass.

Danis was supposed to be in court today for the charge, however, he’s had the date postponed as his legal team continues to develop the case. He denies ever telling the bouncer to look him up on Google. In fact, by Danis’ account, it was the bouncer who was being arrogant, with Danis even offering to show his passport for identification,

“The funny thing is, he’s saying I showed him Google images… I showed him my passport, and I showed him my vaccination card. I was like, ‘ Bro, listen. I just don’t have my wallet on me because we were taking pictures.’ I was at a wedding. I was in a suit; no pockets or anything. He’s like ‘Oh, f—. You think you can do whatever you want. I know who you are.’ I’m like, ‘Bro, there’s no point for this. I’m having one drink with my friend and his family, then we’re leaving.’”

Danis then stated that the knee brace he was wearing during the altercation, was because his first knee surgery failed and he recently had a second follow-up surgery, with the doctor not permitting any walking without crutches,

“So, I’m not allowed to move. I’m standing on the Boardwalk. I would’ve left… And then these guys started being confrontational.Then, they bring a bunch of the bartenders from inside, and it’s like 9 people, I swear to God, and they surround me…

And I’m in a good mood. I’m out trying to get girls whatever, I’m chilling… And these guys are like, so egotistical. They were just trying to fight me like, ‘You talk all that sh*t.’ So then, they circle me and I think there’s like nine of them. So I’m like ‘Yo, just no one touch me and we don’t have a problem. I’m not allowed to move, I’m on crutches.’ And I can’t go into too many details because it’s still under investigation. He’s under criminal investigation, there’s no court yet, we didn’t go to court yet.”

At this point, Dillon says, is when the bar staff became physical with him and the fighting began,

Anybody that knows jiu-jitsu or anything, you could see my arms in the air. I’m like, ‘okay, I’m good.’ He’s like ‘you’re under arrest.’ and the crazy part is, it’s like a 300-400 pound dude and I’m 190 and he jumps on my back like that from behind, so I thought it was a police officer. I’m like, ‘Yo, my arms in the air. I don’t know why he’s not arresting me. What the hell is going on?’

Danis says he was only in jail for about twenty minutes, “They let this go right away because the cops are fans and stuff like that. All the cops were on my side. I thought that was a cop… They put me in for like twenty minutes. Cop drove us to another party.”

“The craziest part about that guy is that he wasn’t involved in that whole thing. These guys were trying to take me down. They couldn’t get me down and this friggin’ 400-pound friggin’ fat slob jumps on my back and I’m on one leg… And now he’s walking around like he’s some hard man and sh*t like that. But he’s in trouble for impersonating an officer, there’s a whole thing, he’s going to court. It will get taken care of.”

For the full interview with Danis, skip to the 1 hour and 34 minutes in of Ariel Helwani’s ‘The MMA Hour’ available on YouTube.