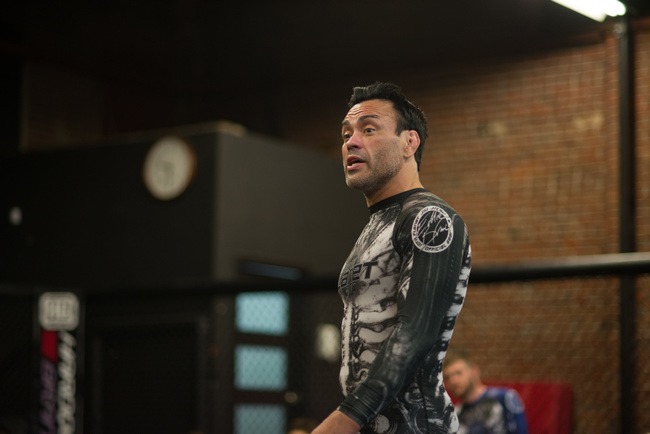 As a former 10th Planet guy, I can’t tell you I wasn’t nervous when I got the call for an Eddie Bravo interview. They say never meet your heroes, even though I feel like I practically already had.

The truth is, we all sort of know Eddie. His many appearances on “The Joe Rogan Experience” have shown us nearly every side of him. There’s Look-Into-It-Eddie, Super-High-Eddie, and Hyper-Focused-Eddie to name a few. It’s hard to imagine there’s a “real” Eddie we don’t yet know about.

After the end of our half hour talk, I get no hints that Eddie is any different than we’ve all seen on camera the last several years. What you see is what you get. He’s the most eclectic martial arts master you’ll ever meet. He’s in a metal band, doing stand up comedy, and running over 100 academies across the world. I get why even his most dedicated student simply call him “Eddie.” He’s not guy seeking the Helio Gracie treatment. But who knows? He just might get it someday.

We started by talking about ADCC, how his career is forever tied to the promotion due to his famous upset against Royler Gracie. Eddie doesn’t hide the fact that he wants 10th Planet in the fight for ADCC gold every year, his goal is to have a 10th Planet competitor in every weight class, which should happen by ADCC 2021. He tells me the tournament is personal to him, it’s his legacy. He knows every guy from his team going to ADCC, and wants to talk about all of them. He rattles of a string of names and detailed breakdowns of their games. Marvin Castelle is getting really good at the truck position, Geo Martinez is focusing on wrestling. Eddie is fully plugged into his team. But not just the guys:

“Elvira Karppinen is on her way to becoming, she already is, one of the best girls in the world at her weight, for sure. She was a brown belt back in 2017, and she beat Mackenzie Dern. . .now she’s a black belt, she’s better than ever. If you saw her at Qunintet, she just ripped through three girls.”

I mention how in nogi grappling, it seems like the belts matter less and less. Eddie agrees, he raves about Ffion Davies and her strong showing as a purple belt at EBI 11. He recaps her entire match against Talita Alcantar Eddie himself was just a brown belt when he defeated Royler the first time (okay, technically the only time).

Eddie has found a simple solution for running his empire: He doesn’t.

We dance a little around the Royler match, I know Eddie has been asked every question there is about it. It’s the most well known match in ADCC history among casual fans. The rematch was probably one of the most important, and most watched, matches in BJJ history, particularly for 10th Planet, who was still on a mission for validation in 2014. For the first eight or so years of the system, Eddie says he had little interest in a pro jiu-jitsu team. At that time, the nogi tournament scene was slim, and the sub only format didn’t exist.

Taking 10th Planet From MMA Back to Jiu-Jitsu

Eddie focused his effort on making 10th Planet an MMA system. For years, his team were the black sheep of the gi oriented, IBJJF dominated community, which had actively outlawed many 10th Planet techniques, even when Eddie was pulling off twisters as a colored belt. The message was clear: you’re not real jiu-jitsu. But Eddie just bided his time. He may not be the present, but he could be the future.

“Once the sub only movement took off, that’s when I decided to focus a lot more on the sport aspect of jiu-jitsu. I revamped the system. Instead of just MMA jiu-jitsu, we had to really turn it up on the sport side as well.”

Despite the popular perception that Eddie is scatterbrained, he shows a lot of forethought into how he structured the 10th Planet system. Way more than a collection of unorthodox positions, Eddie has made it a legitimate curriculum. So much so, you can’t attend advanced classes at 10th Planet Headquarters unless you’ve mastered the basics, or you’ll be lost during the warmups.

“People go into jiu-jitsu and they don’t want to memorize anything. They just want to roll. Every class is like a mini seminar, it doesn’t have to relate to the next day. So it’s very hard to build a day to day [curriculum]. The warmup system I designed is my attempt, and I think I did a pretty damn good job, of solving the problem of putting together an advanced curriculum for a martial arts school. Because it’s really hard to build, you can’t build on anything when it’s a new crew every night.”

Nobody Believed in 10th Planet, Now They’re Racing to Catch Up

Even with a redesigned system, some purists still talked about nogi jiu-jitsu as a less refined version for the unwashed masses. Eddie admits there was a chip on his shoulder for a long time.

“When people talk a lot of shit on you, you tend to fire back. People called me a fraud, a scam artist, that I got lucky with Royler, all that shit. So yeah, I fired back. But now I don’t give a shit. I proved myself already. My association is stronger than ever, and we’re going to keep growing.”

I ask if the Royler rematch was the turning point. Eddie seems reluctant to attribute it all to that one moment. But he says it definitely didn’t hurt.

“It solidified my place in jiu-jitsu history, as one of the guys that contributed.”

And contribute he has. 10th Planet now has over 100 academies across the world. I’m curious if Eddie finds being the CEO of a worldwide business a burden. I can’t picture him in an office making calls all day. But Eddie has found a simple solution for running his empire: he doesn’t.

“The way I run it is as simple as possible. Over the last two years we really, really tightened up a lot of things. It’s a lot harder now to become a 10th Planet head instructor. You have to be a black belt now.”

I ask him how big he wants 10th Planet to be. Is it the next Gracie Barra?

“If you’re not growing, you’re dying. So yes, we’re gonna keep growing. But it’s not like a goal that I need to reach. I got about 115 schools right now. That’s enough. The growing part has slowed down a little bit because of the new conditions. If we froze at a hundred, I’d be cool. If we froze at fifty I’d be cool.”

It’s Eddie’s hands off approach that probably makes it all work as well as it does. Each school has a lot of autonomy in how it’s run, so every 10th Planet gym is a great refection of the academy owner. No uniform policy, no brand guidelines, not even Eddie’s warmup system, which he spent years refining, is imposed on the other satellites (or “Moons” in 10p lingo). It keeps friction low in the organization, which is the way Eddie likes it.

But to Eddie, one of the greatest validations of his work is the fact that, slowly but surely, 10th Planet techniques are being adopted by the wider BJJ community. For many, positions like the lockdown and the truck aren’t 10th Planet, they’re just jiu-jitsu

I asked Eddie what he thought of Mason Fowler, a Caio Terra student who won ADCC West Coast trials using the rubber guard.

I was about halfway through my 2nd match, playing rubber guard.. getting close to the omoplata a couple times, and I heard a voice yelling for me to stop trying to finish the submission and use it to sweep. Sure enough, I look over and it’s the man @eddiebravo10p himself coaching me during my match. I ended up sweeping and winning 2-0. After the match he told me I had a really good rubber guard and asked where I learned it. I told him years ago my friend @smartybjj let me borrow his mastering the rubber guard book and I never gave it back ????. Thanks for the words of advice Eddie and it was great to meet one of my idols ???? @moyabrand #moyafam . . . . #bjj #jiujitsu #mma #wrestling #jiujitsulifestyle #jiujitsu4life #omoplataeveryone #brazilianjiujitsu #adcc #ibjjf #nogi #brownbelt #superfight #grapple #10thplanet #eddiebravo

Eddie calls the 10th Planet scene emerging in NorCal, often among non-affiliated academies like Caio Terra, “a beautiful thing” and says he’s a big fan of Mason, and anyone who picks up the system’s positions in their regular training.

I comment to Eddie that he is a little like Tom DeBlass, whom I had just interviewed hours prior, two men that have nothing left to prove. Eddie agrees. He says he doesn’t a billion dollars or a hundred more schools.

“I just wanna keep doing what I’m doing, keep the pace I’m going. Hopefully everything works out. Life is good, I have no complaints. I just want to spread peace and love.”

That quote is the closest in my Eddie Bravo interview he comes to sounding like a martial arts master during the interview. But regardless of what he sounds like, I don’t doubt his place on the Mount Rushmore on BJJ is being held.

Check out our ADCC 2019 live play-by-play and results.