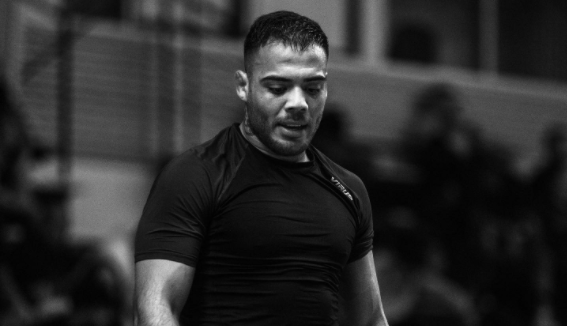 In January, Cruz picked up arguably the biggest win of his young career — a hard-fought decision victory over 2019 ADCC silver medalist Nick Rodriguez at Who’s Number One. If grappling fans didn’t have Cruz on their radar before, they certainly do now.

Cruz recently appeared on the Open Guardcast and spoke about a wide variety of topics, including his match against Rodriguez and who he’d like to face next. Notably, Cruz talked about his plans to transition to MMA as soon as this year.

Simply put, Cruz wants to face the best competition available. He does, however, have a certain heavyweight opponent he’d like to face:

At heavyweight I would want to fight Victor Hugo. He was talking a little smack on the Gram, saying me and Nicky Rod’s match was boring… I just feel like if you have something to say, let’s see what you can do.

Like many jiu-jitsu athletes, money is tight for Cruz. He quit his job so that he could train and compete full-time. Cruz spoke extensively about going “all in” on jiu-jitsu, or “burning the boats.”

I haven’t gone back since. I basically burned the boats… To be the best at anything, you can’t have a plan B… I can’t tell you how many times I’ve won big events and I’ve had zero dollars in my pocket… People are congratulating you but you don’t have anything. It’s different because you won and you’re like ‘it’s gonna pay off eventually, it’s gonna pay off eventually.’ Whereas if you lose and you already sacrificed everything, it’s even s****** so you don’t want to lose… It’s a crazy risky mentality but I feel like to be successful and accomplish whatever it is you want to accomplish, you have to burn the boats… I gave up everything. This is it. This is what I want my life to be so thank God it’s been working out that way.

The goal would be to be UFC champ… Win the belt, buy a big old house with my own training facility… After I’m done competing I want to be a legendary coach, coach world champions and stuff like that. I see that happening after this year.