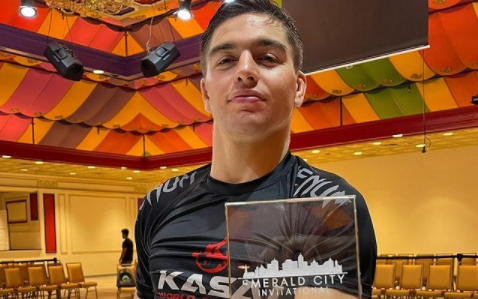 In the opening round, Grippo made quick work of late replacement Ellis Karadag with a brutal heel hook from the leg drag position.

In the quarterfinals, Grippo took on Raul Rosas Jr., fresh off an upset win over Luis Quinones in the prior round. Grippo controlled position and threatened submissions for much of the regulation period, but Rosas was able to survive to overtime, when Grippo would finish a rear-naked choke.

In the semifinals, Damien Anderson went after Grippo’s legs early and often, but Grippo was able to nullify Anderson’s attacks and counter with his own attempts to take Anderson’s back. In the closing minutes of regulation, Grippo passed Anderson’s guard and solidified side control, but the match would again move to overtime. In overtime, Grippo maxed out a full six minutes of back control — three rounds of two minutes of control. That control, coupled with Grippo’s own escape time, moved him to the finals against Kennedy Maciel.

Maciel and Grippo went back and forth for much of regulation, with Maciel threatening guard passes while Grippo displayed world-class guard retention. Ultimately, the match would move to overtime, where again Grippo’s back control appeared to be truly inescapable, as he was controlled Maciel’s back for six minutes. In the third and final round of overtime, Grippo earned his first escape of the match, winning him the title and $10,000.