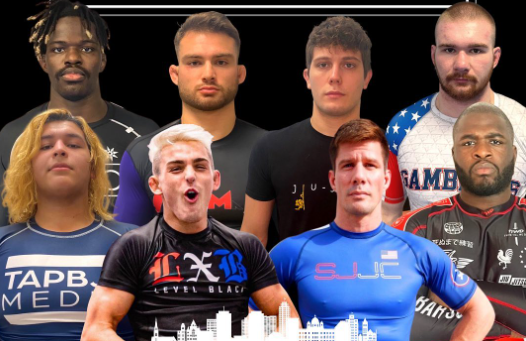 The fifth Emerald City Invitational goes down on Saturday, November 5 and will crown an absolute champion.

The Emerald City Invitational (ECI) is set to return to action with an eight-man absolute grand prix in what might be the most talent-rich card in the promotion’s history. Featuring a mixture of promising young competitors and established ADCC veterans, ECI 5 should deliver a number of compelling, world class match-ups.

Like previous ECI events, all tournament matches will be conducted under EBI rules, with a submission-only regulation period followed by overtime periods as needed.

The bracket includes three recent ADCC veterans, all of whom can safely be considered early favorites. Unity Jiu-Jitsu’s Devhonte Johnson is an IBJJF no-gi Pans, European, and Worlds champion, and possesses an all-around game that serves him well under any ruleset.

Johnson suffered an early exit at the ADCC World Championships, losing in the first round to fellow ECI competitor Kyle Boehm. One of 10th Planet’s top grapplers, Boehm is a leg lock specialist that is well-versed in EBI overtimes techniques and tactics – recently coming in second at EBI 20. This, coupled with his size, makes him a tournament frontrunner.

For his part, Tackett might be undersized but is nonetheless one of the most promising competitors in this bracket and all of jiu-jitsu. The younger brother to ADCC veteran William Tackett, the 19-year old is known for his ultra-aggressive, submission hunting style that borders on reckless. Still, his best overall position is likely the back, making him a real threat in any EBI overtime situation.

Speaking of young phenoms, 10th Planet’s Pat Shahgholi is just 16-years old and already well known in the jiu-jitsu community. After winning the EBI qualifiers on the strength of his brutal leg lock game, he won his first-round match at EBI 20 with a devastating heel hook. The teenager will now look to repeat that success against some of the sport’s top athletes.