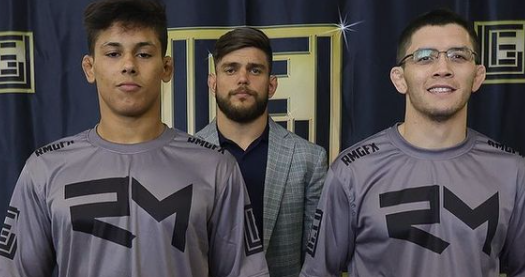 On June 12, 17-year old jiu-jitsu phenom Micael Galvao competed among some of the world’s best black belt competitors at Evolve Ur Game (EUG) 2. Still just a brown belt, Galvao is one of the most hyped prospects in the world. At EUG 2, Galvao defeated Damien Nitkin and Tainan Dalpra before losing to Jonatha Alves in the finals. In a recent appearance on the Open Guardcast, Galvao’s first-round opponent, Nitkin, described what it felt like to compete against the young prodigy.

“The strength wasn’t as big a difference as I thought…” said Nitkin. “We all weighed in, we all got to scope out everybody and see what kind of shape everybody is in… He looked like he should be very strong. He’s just starting to get that man strength, at 17-18 years old. But I think I’ve definitely had opponents that have felt stronger.”

So if Micael Galvao doesn’t have a massive strength advantage, what exactly makes him so good?

“I just think, if anything, his timing was good and how tight he was,” said Nitkin. “Once he got the sweep, he was fundamentally on point with keeping his knees pinched, not worrying so much about crossing his feet. He made sure to take away things from me slowly and patiently, which shows a lot of knowledge he’s acquired from training so long at such a young age. He’s not rushing things. He wasn’t being impulsive. He was inching towards victory, which is good.”

Nitkin also offered detailed breakdowns of Galvao’s semifinal match against Tainan Dalpra, as well as Galvao’s loss in the finals against Jonatha Alves.

“Hats off to Alves for winning the match, for playing it correctly,” said Nitkin of the EUG 2 finals. “I think if you run it back and Alves doesn’t get that call or doesn’t get that immediate sweep off the guard pull. You have a match that, in my opinion, goes the way of Mica in a ref’s decision.”

Damien Nitkin is the head instructor and co-owner of Atlas Grappling in Las Vegas, NV.