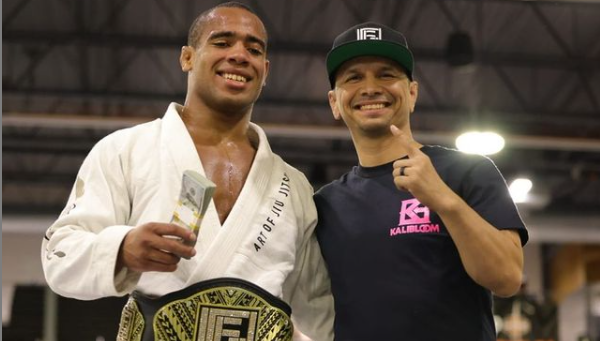 Evolve Ur Game (EUG) returned on Saturday with its second $10,000, eight-man tournament. The field was stacked with elite 170-pound gi grapplers, and it was Art of Jiu-Jitsu’s Jonatha Alves that walked away the winner, defeating Michael Liera Jr., Jonnatas Gracie, and Micael Galvao to claim the EUG title.

Alves had a pair of razor-close matches in the quarterfinals and semifinals, against Liera and Gracie, respectively. Both matches ended in a 2-2 tie, but under EUG rules, Alves was declared the winner because he was the last grappler to score. On the other side of the bracket, brown belt phenom Micael Galvao, representing Fight Sports Miami, submitted Damien Nitkin in the quarterfinals before earning a close but well-deserved decision win over Tainan Dalpra in what was undeniably the match of the night.

In the finals, Alves earned a quick two points and was able to slow down the hyper-aggressive Galvao, forcing him into the 50/50 about midway through the match. Moments later, Galvao very nearly swept Alves, but Alves was able to defend and landed inside Galvao’s closed guard. After a referee stand-up, Galvoa pulled Alves into his closed guard and very nearly a triangle choke. Again, Alves was able to defend, doing just enough to win the tournament and a cool $10,000.

View the full EUG 2 170-pound tournament results and highlights below.