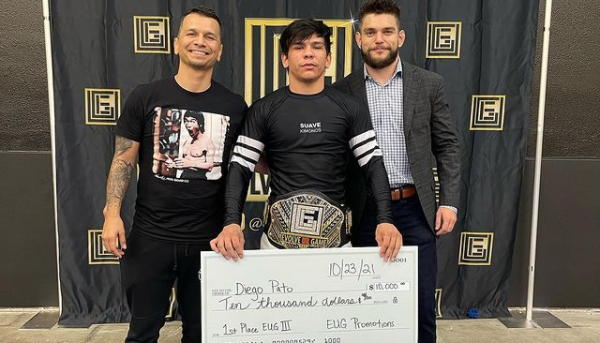 In his first-round match, Oliveira showed off excellent positional control and passing against Villiatora, earning a dominant 9-0 victory. The win, coupled with Sousa’s win in his quarterfinal match, set-up a highly anticipated semifinal showdown between rivals Oliveira and Sousa. The match delivered from start to finish, from hard wrestling in the opening minutes to aggressive work on the mat, where Sousa looked to pass as Oliveira attacked from his back.

After 10 minutes of action and the score tied 0-0, Oliveira was awarded the decision on the strength of his steady attacks from bottom and several near entries on the legs. With the win, Oliveira moved forward to face tournament favorite Grippo in the finals.

Under the modified EUG ruleset, guard pulling was prohibited in the first three minutes of each match; the remaining seven minutes were contested under IBJJF rules. That rule modification would prove important in the finals, as Oliveira was able to secure a quick takedown and a 2-0 lead on Grippo, who seemed less comfortable in wrestling exchanges.

Grippo would Oliveira’s relentless passing attempts for nearly eight minutes before securing a sweep to tie the score at 2-2. The match would end with that score, with Oliveira awarded the referee’s decision. Certainly, an argument could be made for Grippo winning the decision, but Oliveira set the tone for much of the match with his aggressive guard passing.

The EUG tournament crown is yet another accomplishment in a phenomenal competitive year for Oliveira. In 2021, he has won the gi and no-gi Pans, the no-gi Worlds, and had a third-place showing at the Who’s Number One Championships.