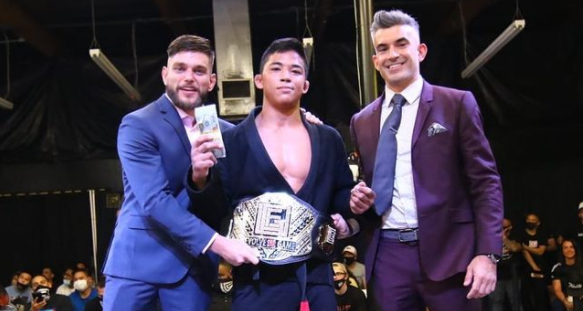 On Saturday, April 3, some of the best featherweight and lightweight gi grapplers on the planet competed in the inaugural Evolve Ur Game (EUG) promotions event. The card featured an eight-man, 160-pound tournament with $10,000 in prize money on the line, as well as a handful of high-level superfights.

The big winner of the evening was Team Atos representative Andy Murasaki, who was making his black belt competition debut. Despite his relative lack of experience at the sport’s highest level, he looked nothing but prepared. In his first-round match, Murasaki used a steady mix of outside passing, pressure passing, and a threatening knee cut to secure a referee’s decision over Kennedy Maciel. Murasaki would use that aggressive and effective passing throughout the night on his way to the championship.

In the second round, Murasaki faced veteran berimbolo expert Gianni Grippo. Murasaki used a picture-perfect pressure pass to find his way to side control, where he quickly secured a triangle choke, handing Grippo his first submission loss in years.

In the finals, Murasaki squared off with Matheus Gabriel, who had used a dangerous De La Riva and lasso guard on his way to the finals. Again, it was Murasaki’s pressure and constant leg drag passing attempts that controlled the match. Despite a last-second near-sweep from Gabriel, it was Murasaki’s work throughout the match that earned him the decision win and $10,000 in cash.

After the match, Murasaki announced his plan to compete in the next EUG event, which is scheduled to feature 170-pound grapplers.