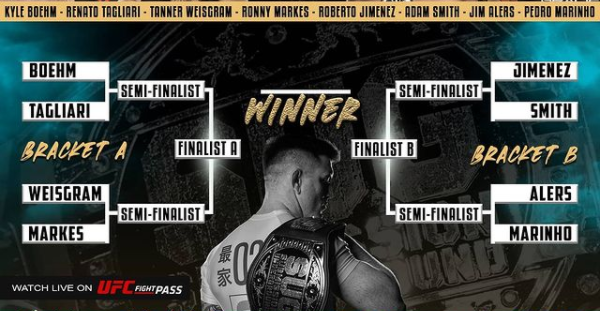 On Sunday, June 27, Submission Underground (SUG) will hold an eight-man absolute tournament featuring some of the top submission-only grapplers and jiu-jitsu players in the world. The tournament winner will walk away with two things: a fresh check for $10,000 and a guaranteed shot at SUG champion Mason Fowler’s title. Check out the full tournament line-up and broadcast information below.

It’s worth noting that this is the same tournament that Mason Fowler himself won last year. In June 2020, Fowler defeated Warren Brooks, Kody Steele, and Roberto Jimenez to earn a shot at Craig Jones for the SUG absolute title. Fowler made the most of his opportunity with back-to-back wins over Jones and hasn’t looked back since, successfully defending this belt seven times.

Kyle Boehm: A 10th Planet black belt, Kyle Boehm is one of, if not the largest competitor in the field. But Boehm is more than just a big body; he is a dangerous submission-only specialist. He holds wins over Gabriel Almeida, Tex Johnson, and Lucas Barbosa. Like any top 10th Planet competitor, Boehm is well-versed in the EBI overtime format utilized by SUG.

Renato Tagliari: Renato Tagliari is a Caio Terra black belt with experience competing across a variety of rulesets, from IBJJF to EBI and submission-only. He has shared the mats with elite competition before, and will look to make a name for himself as he squares off with Boehm in the first round.

Ronny Markes: Ronny Markes is a longtime MMA veteran and black belt under Andre Pederneiras. Of his 19 professional MMA wins, five have come by way of submission. Markes competed in the first-ever SUG event, losing by heel hook to Vinny Magalhaes in the main event.

Roberto Jimenez: Widely considered one of jiu-jitsu’s most exciting competitors, Roberto Jimenez’s all-offense seems tailor-made for the SUG ruleset. He lost to Fowler in the 2020 SUG absolute tournament, and is coming off a loss to Pedro Marinho at Third Coast Grappling, but with his submission prowess and endless gas tank, it would be silly to count Jimenez out of any match.

Adam Smith: Perhaps the field’s smallest competitor, Adam Smith is a 20-fight MMA veteran and is undefeated in SUG competition with wins over Alex Larmey and Benji Silva.

Jim Alers: A UFC veteran with experience in submission grappling as well as bare-knuckle boxing, Jim Alers is coming off a submission loss to Jimenez at the Combat Jiu-Jitsu Worlds.

Pedro Marinho: Pedro Marinho is arguably the field’s most accomplished jiu-jitsu player; he was an IBJJF Worlds and Pans champion as a brown belt. He is a guillotine specialist and, in addition to wins over Jimenez, holds notable victories against Gabriel Almeida, Oliver Taza, and William Tackett.

How to watch: Submission Underground 24 takes place on Sunday, June 27 and will air live on UFC Fightpass (subscription required) beginning at 6 PM EST.