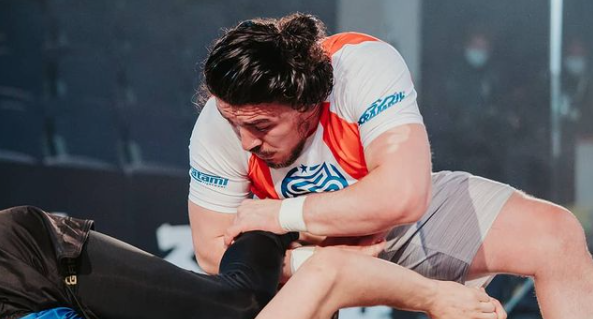 On July 17, Bradley Hill will take to the mats for the third time representing Team UK/Ireland at Polaris Squads. His team will be taking on a Team USA that is stacked with elite competitors, including two-time ADCC champion JT Torres and young phenoms Kade Ruotolo and William Tackett. But Hill and his squad will be carrying one significant advantage: experience under the unique Polaris Squads ruleset.

“It really comes down to experience,” Hill told Grappling Insider in an exclusive interview.

Indeed, four of Hill’s Team UK/Ireland teammates have competed alongside Hill at the first Polaris Squads event. The team-based competition features squads of grapplers competing head-to-head in lightning-fast submission-only matches. At the end of two 40-minute halves, the team with the most submissions wins.

Hill is an IBJJF British National champion (weight and absolute) and one of the UK’s elite competitors. He started training in jiu-jitsu at the age of 12 after meeting Victor Estima, who Hill described as “the coolest person [he] had ever met.” At 21, Hill earned his black belt and has since pursued the life of a professional athlete, training twice daily and competing at the highest level regularly.

The Polaris Squads ruleset, while entertaining for fans, represents a challenge for competitors, says Hill.

“The biggest takeaway is literally just how fast the match is,” he said. “It’s a five minute fight. Because you go from being sat on the bench to immediately being called up, it really feels more of a three minute match by the time you get started.”

Unlike Hill and his team, none of the Team USA competitors have competed under this ruleset.

“I think that’s one big shock to the system to anyone who hasn’t competed in the ruleset before. As jiu-jitsu practitioners, we’re used to 10-minute matches, 15-minute matches. There’s a much slower pace. And then you really get shocked in your first time where you get called up on thirty seconds notice, your team captain has nominated you, you’ve got to run in and fight one of the best guys in the world. This is the third time that I’m doing it now. I’m well prepared to just go all guns blazing from the start.”

Beyond the short matches, the overall format of the competition also tests competitors’ mindsets. Whereas most IBJJF competitors are used to going home once they lose, the Polaris Squads team format means that competitors must be ready to grapple multiple times, even if they’ve lost their first match.

“Because of 40-minute halves, five-minute matches, you don’t necessarily get a lot of time to really put in your work,” Hill said. “So if you get caught off guard at the start of the match, it could be a rough night for you. And that plays in your mind. In jiu-jitsu we have a knockout elimination style tournament, so if you don’t perform, that’s the end of the day and you go home. But now it’s if you don’t perform in your first five minutes, you’ve got to sit, watch the rest of your team, then you still might get called up to go again, and you have to deal with your emotions of ‘I didn’t perform as well as I would like to, how am I going to change that?’ Do you let that weigh you down and not fight well in the second fight or do you use that to spear you on and really go hard in the second match? Again it really comes down to experience.”

Hill has experienced the power of a positive mindset in competition firsthand. At the Polaris Squads gi competition in November 2020, his team found themselves down big against Team Europe after the first half. By that point, Hill was already a Squads veteran and used that experience to rally his team.

“There was really low morale backstage, so I had to get a bit of some team talks going and really encourage people, let’s just go out and have fun in this next half and just try to put at least one point on the board so we can have some good matches. And everybody competed a lot better,” he said.

Team UK/Ireland face a daunting task ahead, as Team USA is loaded with some of the best grapplers in the world. Hill recognizes just how talented the team is, and relishes in the opportunity to test his skill against so many elite competitors.

“It’s very new style of jiu-jitsu for USA team, but then you still have the team captain, the legend, JT Torres, which I think everybody is excited to get a chance to step on the mats with. That’s the big match that everybody is looking for. Of course you’ve got William Tackett that’s on the rise now, that’s looking great. PJ Barch is looking great, and also I think that’ll be a good clash of styles with the wrestling. Edwin Najmi, as always, is exciting with his flying submissions and d’arce chokes. There’s a number of matches on the other side that I think would be thoroughly exciting.”

Over the past year, Hill, like many other jiu-jitsu practitioners, has scene his training greatly restricted as a result of the COVID-19 pandemic. And while the closure of jiu-jitsu clubs threw a wrench in his typical training routine, it did force him to develop a part of his game that he believes will come in handy at Polaris Squads: his wrestling.

Whereas before Hill was training wrestling just once a week, the pandemic and change in available training partners and coaches led him to training with professional MMA fighters and focusing on his wrestling much more than usual. He currently trains out of Fearless MMA in Birmingham, specifically training his wrestling under former captain of the Great British Wrestling Team, Kamby Banger.

“It’s usually been just once a week,” Hill said, “but then you realize that just once a week is not enough, so now I’m wrestling four or five times a week at the moment. Just getting comfortable and learning how to wrestle like a wrestler rather than just looking at wrestling as a supplement to the jiu-jitsu, and rather than just thinking about it as a takedown, really trying to embed it into the game… It’s actually helped out quite a bit considering how wrestling dominant the US team is.”

Hill is well-aware of the explosion of wrestling in the overall jiu-jitsu metagame. He is aware that Team USA features excellent wrestlers and takedown artists. Importantly, though, he is aware that these will be submission-only matches, not wrestling matches, and while he is excited to test his skills on the feet, the ultimate goal remains a submission in every match.

“I’ve been training [wrestling] so I want to put it into practice. At the end of the day it’s a submission-only tournament but the standing game will give us a lot of good positions. It’s going to give me the back exposure, it’s going to give me good positions on the takedown, and like is say, it’s something I’ve been working on. So at this point, it’s just a matter of finding out how my skills have improved in comparison to some really good wrestlers over in America. We’ll see what happens on the day. At any point I can jump guard, I can sit to the floor, so I may as well enjoy wrestling the first couple of minutes.”

How to watch: Polaris Squads takes place on July 17 and will air live on UFC Fightpass (subscription required).