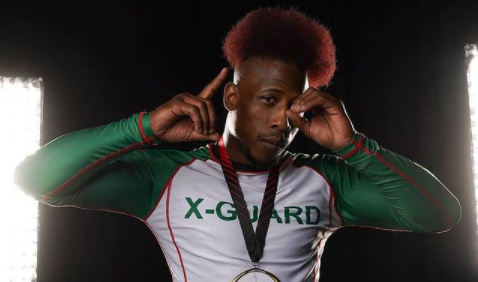 On May 23, elite 10th Planet black belt Kyle Chambers will challenge Mason Fowler for his Submission Underground (SUG) title. It’s not only a shot at Fowler’s title, but a shot at one of the best gigs in professional grappling: a steady, reliable paycheck simply for competing. And although Fowler has been nothing short of dominant since winning the title in 2020, Chambers is poised to play spoiler.

Chambers is a 10th Planet jiu-jitsu stylist through and through. It’s a style that even Fowler admits is well-suited to the SUG ruleset, with an emphasis on submission-hunting and extreme proficiency in EBI overtimes. And because Chambers has spent his entire jiu-jitsu career under the 10th Planet system, he has been, in a sense, preparing for this opportunity for years.

Chambers’ introduction to jiu-jitsu came in a familiar form: being beaten by a much smaller but more experienced grappler. While Chambers was in his early 20s, a friend invited him to try jiu-jitsu at was at the time 10th Planet Vista, now 10th Planet Oceanside; it was there that he met Geo Martinez.

“I met [Geo Martinez], great energy,” Chambers told Grappling Insider. “I remember rolling with him thinking I’m like 6’3″, 215-pounds, 220-pounds, so I’m thinking this little guy, I’m gonna be able to smash him easy, no problem, because he’s only like 5’8″, 145… Literally he got me in a gogoplata three times within a couple minutes. It’s just like I couldn’t believe somebody so small could do that to me, somebody so big.”

For the tall and athletic Chambers, getting handled by Martinez was a particularly humbling experience. But that experience forced him to pursue jiu-jitsu, and he was quickly welcomed into the 10th Planet fold.

“It just clicked at that time. If he’s able to do this at his size, imagine what I could do at my size, if I get more technical. Basically, the rest is history. [Martinez] introduced me to his brother, Richie ‘Boogeyman’ [Martinez]. I little bit later I ended up meeting Master Eddie and I just fell in love with the community, the camaraderie. We had an instant rapport.”

Martinez remains Chambers’ main coach and training partner to this day. And while he visits Richie Martinez weekly and Eddie Bravo at the 10th Planet headquarters a couple times a month, Chambers still does the bulk of his training with Geo Martinez. Because Martinez is himself an active competitor, the pair has developed a symbiotic relationship in which they both improve.

“That was my first move and still my favorite move, honestly. If you’re in my full guard I’m just trying to gogoplata you.”

Although Chambers is a large athlete by jiu-jitsu standards, he took quickly to the flexibility-oriented 10th Planet style taught by the diminutive Martinez.

“Yes I was big when I came into jiu-jitsu, but I’ve been small my whole life,” Chambers said. “I didn’t grow until college. Even going into college I was under 6 feet, so it wasn’t till later in my life that I actually started growing. Going into jiu-jitsu was kinda simple for me because I already had the background of understanding technique and I always had the mentality I didn’t really wanna be brutish in any way.”

Following that 10th Planet system led Chambers to develop what is now considered the most dangerous part of his game — leg locks. But that development didn’t happen immediately, or even intentionally. Instead, he first developed a dangerous closed guard game that forced opponents to present their legs.

“What happened was, and it sounds cliche, I was just a rubber guard guy. I loved the flexibility. The first move I got caught in was a gogoplata, so I was like, dude, how can I get a foot in somebody’s face, how can I choke somebody with my foot, ya know?… That was my first move and still my favorite move, honestly. If you’re in my full guard I’m just trying to gogoplata you.”

Opponents caught on and started avoiding Chambers’ guard at all costs, leaving an opening for leg attacks.

“So when you try to play open guard and you’re standing passing, what’s usually in front of you? It’s your legs, you’re leading with you legs. That’s what evolved my game,” he said.

Indeed, Chambers might be the most dangerous leg locker in SUG. To earn his shot at Fowler’s title, Chambers submitted Ben Egli with a heel hook in just over a minute. He holds three heel hook victories in Combat Jiu-Jitsu.

Against Fowler, Chambers will be facing a much more “traditional” approach to jiu-jitsu, relatively speaking. Chambers is quick to compliment Fowler on his jiu-jitsu IQ, adaptability, and finishing instincts.

“I understand that he’s really strong,” Chambers said about Fowler. “He has a good, technical, traditional game but he also is really smart. He understands the importance of looking at other systems and adapting your style… I know he trains with Caio Terra, but I know he has a lot of 10th Planet jiu-jitsu in his style, and he does a lot of other stuff that makes his style a little bit unique in his own right.

“I also take away that he’s really strong in that if he gets a grip, he kinda finishes everything, so you have to be really aware of everything he does… If he gets an underhook, he gets an overhook, he pretty much goes for that kill right away, zero to a hundred.”

As for the match, most observers will expect Chambers to attack from his back while Fowler tries to pressure from top position. But Chambers isn’t so sure that will be the case. He recognizes that Fowler is a smart competitor and, accordingly, could easily switch up his gameplan from match to match. By that same token, Chambers is more than able to show more than just a dangerous guard and leg locks.

“Smart people never really have the same gameplan,” Chambers said. “They kinda always alternate. Just speaking from personal experience, me, I always have multiple gameplans. And once I come in, I feel it out and just go with the flow. So I could say yeah I’m gonna pull guard because that’s typically kinda what I do, but I also could wrestle, I could also play top game…

“I can stand, I can wrestle, I can pull guard, I don’t really care. I just want have him to engage with me and if he engages, we can see something interesting.”

How to watch: Submission Underground 23 takes place on Sunday, May 23 and will live on UFC Fightpass.