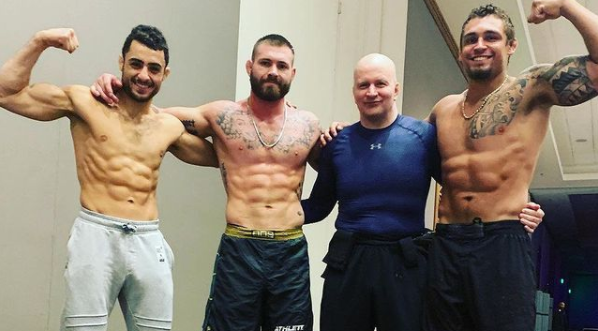 Oliver Taza has been a fixture of the elite competitive jiu-jitsu scene for five years, and he’s spent the bulk of that time as a member of the famed Danaher Death Squad. Going from white through purple belt with Tristar head coach Firas Zahabi, then receiving his brown and black belts from John Danaher, it’s difficult to find a better pedigree in the sport. Taza recently spoke to Grappling Insider about his path to the Danaher Death Squad, the training atmosphere among the sport’s top competitors, and his ever-evolving jiu-jitsu game.

Taza’s first connection to Danaher and his techniques came through Gordon Ryan. In 2015, Taza was living in the Tristar dorms training under Zahabi. MMA fighter Tom Breese brought Ryan in to help him prepare for a fight, and with Ryan needing a room to stay in, Taza was forced out of the dorms. The arrangement turned out to be a blessing for Taza.

“I was the uke (demonstration partner) for those privates and honestly, just being the uke, I was like ‘wow, this is really next level stuff. This is really next level stuff what I’m learning. It feels different, it feels better, it makes sense,” Taza recalls. “And from there, I drove back with Gordon. Gordon brought me to John, to Garry [Tonon], brought me to Brunswick, introduced me to Tom DeBlass.

“From there it was just a matter of sticking around, because a lot of people come but don’t stay, because it’s not an easy environment training under John. It’s hard work, but you stick around and you slowly see the benefits.”

Even if Taza says the benefits of training under Danaher came slowly, he quickly made his mark on the competitive scene. In 2017, he won the ADCC European trials, submitting three opponents by heel hook and establishing himself as one of jiu-jitsu’s most dangerous leg lockers.

2020 was arguably Taza’s breakout year as an elite competitor, as he won the BJJ Fanatics Grand Prix on the strength of wins over PJ Barch, John Combs, and current DDS teammate Ethan Crelinsten. He remains one of the sport’s most active grapplers, competing in IBJJF and submission-only tournaments consistently in 2021.

“I don’t see myself training anywhere else.”

Naturally, Taza credits much of his success to what could be the best training room and team in all of jiu-jitsu.

“With John it’s very professional,” Taza said. “You get in, he’s got it all planned out. He doesn’t say it, but you notice we go through phases where you work on specific things, day in day out.”

Whereas some high-level gyms might shy away from drilling technique in favor of more sparring or conditioning, Taza says that drilling is a major component of the Danaher formula, and he demands precision.

“We do a lot of drilling. Some people criticize drilling as being mechanical, you’re not thinking. The standards when we drill, John is looking, and if there’s the slightest detail wrong, John is gonna make you do it again, everybody’s gonna be watching and listening and watching you f*** it up, so you want to do everything perfectly when you’re doing the technique.”

“We’re all friends. It’s rare you’ll be in there uncomfortable or feel rejected.”

Training under Danaher’s exacting standards is no joke. It’s room filled with the best grapplers in the world doing everything they can to keep a competitive edge and stay among the best in the world. But that doesn’t mean Taza and his DDS teammates don’t have fun.

“There are times when you can joke around, and there are times when we are serious,” Taza said. “When John is explaining, everyone is quiet listening, trying to pay attention, trying to see how he’s doing the move… When you’ve been drilling for an hour, hour and a half, guys crack a joke here, crack a joke there, it’s a good atmosphere. I don’t see myself training anywhere else.”

The group has strengthened its bond since relocating from New York to Puerto Rico in late 2020.

“We all live close to each other. I can go knock on Garry’s door, Damien [Anderson’s] door. We’re all friends. It’s rare you’ll be in there uncomfortable or feel rejected.”

From Craig Jones to Gordon Ryan, every member of DDS has a personality that adds to the perfect mixture.

“Craig is always the one roasting everybody but somehow you don’t get mad at him,” Taza explained. “I’m the one people make fun of because I take like 40 minutes to warm up and I have like six kinds of different bands that I wrap myself up in. The old man that takes 40 minutes to warm up is the running gag about me.”

“Gordon is pretty quiet. He’s always been pretty quiet for the most part, but when he says things it’s usually like pretty obnoxious and funny. Garry, just everything he says and does has style and humor behind it, so that’s good to have. All the guys in there, you could have a TV show of just one of the guys in there, just the personalities, it’s pretty funny. I hope one day they make it happen, a reality. Each one of those guys has a different personality and character behind him.”

“Once you put them on their back, people can’t disengage.“

Recently, Taza has found himself leaning on his teammates to find solutions for a problem he’s running into in competition.

Indeed, Taza has competed in three Fight to Win matches in 2021 and lost all three by frustrating decision. All three matches — against Pedro Rocha, Gabriel Almeida, and Hugo Marques — followed the similar pattern of Taza desperately attacking from open guard while his opponents either disengaged entirely, or exploded for short bursts of activity before disengaging again.

To address this problem, Taza sought the advice from another open guard, leg-locking specialist: Nicky Ryan. Ryan advised Taza to improve his wrestling and force his opponents to engage by threatening to put them on their backs. Rather than assume his opponent will go into his guard to try to pass, Taza is now forcing the issue.

“Once you put them on their back, people can’t disengage,” he said. “You can’t run away without giving up your back or something… In a way, it’s flattering that guys want to stall and disengage because it shows that they respect my game. They know there’s a certain area they know they’ll get beat if they go to which is why they’re avoiding it, but it’s gonna be up to me to take them in other places, to take them into my A game, the leg locks.”

When Grappling Insider spoke to Taza, he was preparing for the Subversiv 5 team grappling tournament. In the first round of that event, Taza defeated Almeida in a rematch just a few weeks after Almeida won a decision over Taza. This time, Taza committed to his wrestling and spent essentially the entire match on his feet attacking Almeida, snapping his head down and controlling his hands. The change in strategy earned Taza a decision win.

Wrestling — and the top game in general — is something Taza plans to diligently improve on, as he believes it will pay dividends under any ruleset.

“It’s not something that overnight I’m gonna acquire that skill, but it’s definitely something I’m working for because any ruleset, this skill of being able to put guys on their back is gonna be rewarding. It doesn’t matter if it’s submission-only, points, ADCC, IBJJF, ADCC, MMA, gi, no-gi, it’s just a skill to have.”

“… there are blue belt girls in the gym that could have defended that and given me a little harder time.”

But make no mistake, Taza’s best skillset remains his leg lock game. And with recent changes to IBJJF rules to allow leg reaping and heel hooks for brown and black belt no-gi competitors, Taza has already started to capitalize on his expertise in lower-body submissions. He owns the second-ever (legal) heel hook in IBJJF competition, which he secured at the Dallas Open earlier this year.

“I’m seeing guys that really have no idea what’s going on in the leg entanglements.”

A veteran of submission-only rulesets that allow heel hooks, Taza was shocked by the apparent gap in technical skill that exists for many IBJJF-oriented competitors.

“I got a heel hook finish, and I was like, man, there are blue belt girls in the gym that could have defended that and given me a little harder time,” Taza recalls. “And it was black belt male division, absolute. It was a little bit weird. I feel like there’s definitely a little gap in the leg department, the heel hooks. The top guys I think are catching up but there’s some that are still behind.”

Just as Taza recognized a deficit in his own game and is working to fix it, he also recognizes that other competitors will undoubtedly improve their leg locks, causing him to again improve and modify his own approach. Because for Taza and his DDS teammates, evolution is never-ending.

“You either catch up or you’re gonna fall behind.”